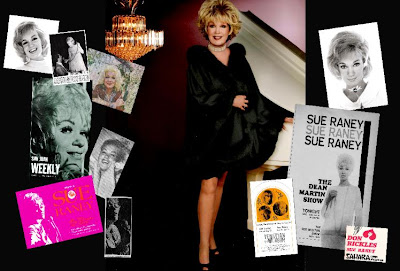 Sue Raney will be appearing with the Nelson Riddle Orchestra, conducted by Chris Riddle, as part of the upcoming Los Angeles Jazz Institute's four-day (Oct. 21-24) "A Jazz Tribute to Frank Sinatra." Sue will be taking part in "A Swingin Session," on Saturday, Oct. 23 at 7:30 pm in the Marquis Ballroom at the L.A. Airport Marriott Hotel. Her very first recording for the Capitol record label was conducted and arranged by Riddle, who was also closely associated with the music and artistry of Sinatra. She also made many public appearances with the Riddle organization during its heyday.

For information on single tickets or all-event passes, phone the Institute at: (562) 200-5477. Further details on the fest are also available at its website: www.lajazzinstitute.org/ 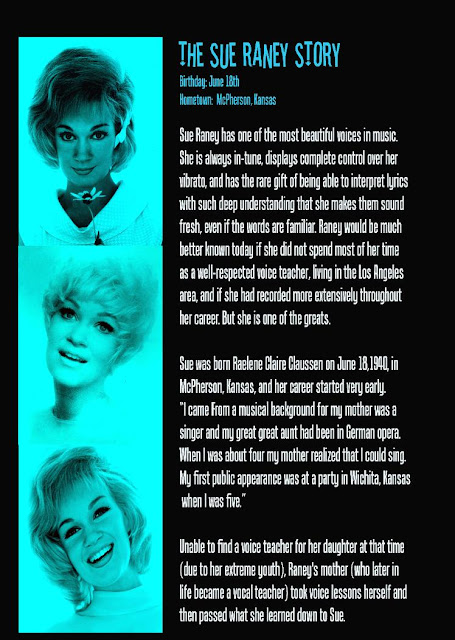 "Early on I sang the hits, tunes the girl singers in the band were performing. While growing up in the 1950s, I first listened to Doris Day, Patti Page, Rosemary Clooney, and Kay Starr. I discovered jazz when I was 16 or 17 and of course soon loved Ella Fitzgerald and Sarah Vaughan."
After working steadily in New Mexico and taking several trips out to Los Angeles during a couple of summer vacations, Sue Raney joined the Jack Carson radio show in 1954. "That is why the family moved out to Los Angeles. I had auditioned for Frankie Laine and made a couple of demos for his office. It was through him that I ended up on the Jack Carson show. It was one of the last major radio programs on CBS and at 15 I was the teenager on the show for nine or ten months. After Jack Carson I started appearing on Ray Anthony's television program and then became the vocalist with his hand when he played the Palladium. When I was 19, I put an act together and started working on the road."
She was already an established singer when most young girls were making a rather awkward transition from Elvis Presley to Clearasil. It took time to polish her vocal talent. There were ups and downs, good breaks and bad ones. There was the time in Australia when the critics banged nothing but praise out of their typewriters and the crowds came early and stayed and stayed and stayed. For a time, things couldn't be better. She completed her third album for Capitol Records and was swamped with hotel and night club bookings as well as offers for various television appearances.
Then came a down. An auto accident crumbled the classic stairway to stardom. Bedridden for months, Sue faded out of the musical picture. But no one seemed to forget. With the help of crutches, she made an appearance on Johnny Carson's "Tonight Show," and became an instant hit.
In the 1960's Sue Raney worked with the Four Freshmen in Las Vegas, toured with her own group, and appeared frequently on television variety shows including those of Red Skelton, Dean Martin and Danny Kaye. During the following decade she became active in the studios where her impressive voice helped sell products. But when asked to name her favorite gig, Sue Raney says "Possibly the highpoint of my life musically was when I toured with Michel Legrand in the 1980's. We worked with symphony orchestras in addition to having a self-contained rhythm section. I had a chance to sing Michel's lovely songs and it was wonderful." Of her own personal recordings she says "I think the trio of records that I made for Albert Marx, on Discovery in the 1980's are the ones that I am most proud of. I also like the Henry Mancini tribute Dreamsville that I did with Alan Broadbent." Sue is also an accomplished songwriter, contributing lyrics to several songs including Statue Of Snow.
These days Sue Raney is quite active as a voice teacher. "I've been teaching since the early 1980's, originally at the Dick Grove school and now privately nearly every afternoon. It is very rewarding. Teaching has allowed me to relearn what I thought I knew and explore new areas. I find that I'm now in better shape vocally than I've ever been. I sing with the L.A. Voices and Supersax, occasionally appear at the Moonlight Tango Cafe in Sherman Oaks near Los Angeles with Bill Watrous' big band and still go on the road when it feels right and it is artistically rewarding." When asked about her future goals, Sue Raney replied "I'd like to record a duet album with Alan Broadbent. But basically I just want to keep on doing what I'm doing, singing the music I love."
Her latest album finds Raney returning to the very same studios at Capitol Records where she cut her first record. Heart's Desire: A Tribute to Doris Day (2007) finds her accompanied by full orchestration (brass, reeds, rhythm and strings) and arranged and conducted by Grammy-winning musician Alan Broadbent.
(This biographical sketch is a compilation of material from various liner notes and reviews by several writers, most notably Scott Yanow. )
Click on image twice for full frame.
Sue's CD store
Link to http://sueraney.org/
Posted by Bill Reed at 5:29 PM