Tip of the iceberg. More raves to come

"Sue Raney has done it again! She is a constant reminder of how a great singer can become an exceptional one. In this jewel she’s only assisted with the piano of Alan Broadbent. Less is certainly more here. Together they whip up 13 unforgettable examples of rarely heard songs. The ever popular “My Melancholy Baby” (Norton/Watson/Burnett) shows absolutely no signs of any wear. Its deeply rich romantic message is crystal clear here. “A Nightingale Sang In Berkeley Square” (Maschwitz/Sherwin) contains just an ever so slight rhythmic beat. Ms. Raney fittingly gives it her all. Her conclusion is almost heart stopping. Sue passionately nails “The Bad And The Beautiful” perfectly. Dory Langdon Previn and David Raksin are both responsible for creating one of the most exceptional romantic songs ever written. As I write this sadly I hear that we have lost the lyricist Dory Langdon Previn. “The Music That Makes Me Dance” (Merrill/Styne) is another heartbreaking evergreen. It was a blow away hit in the1964 Broadway show “Funny Girl” but was unfortunately omitted from the 1968 film version. Alan has an opportunity to give forth a wondrous affectionate solo midway. Hold on to your hats for “It Might As Well Be Spring” (Hammerstein/Rodgers). It receives a most charming upbeat whirl as it goes up, down, and across the scale. It’s truly a lively most meaningful go around. A powerful “Smoke Gets in Your Eyes” (Harbach/Kern) concludes this absolutely perfect showcase." 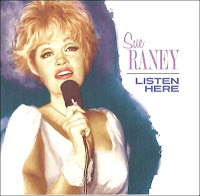 "Listen Here serves as a realization of two life-long goals for veteran singer Sue Raney: recording a duo album with pianist Alan Broadbent and performing the songs that were missed in 18 prior albums! There are thirteen freshly arranged classics done with class and confidence. The open stage allows all of the nuances to ring through loud and clear. Both musicians are easily up to the task never stepping of the other's toes leading to an enjoyable set."

By Christopher Loudon
One of the most underappreciated jazz vocalists of the past half-century, Sue Raney is also proving one of the most durable. Raney, who has been singing professionally since age 14, delivered a trio of excellent albums for Capitol while still in her teens and early 20s, then endured a peripatetic recording career that involved multiple labels and occasionally lengthy gaps (filled with teaching and jingle work—as both writer and performer). Through it all, she has never stopped plugging and, remarkably, still sounds as vibrant and clarion-pure as ever.
In recent years, Raney has formed a mutually beneficial alliance with pianist Alan Broadbent. It was Broadbent at the helm, as arranger, conductor and accompanist, on Raney’s previous album, the silken Doris Day tribute Heart’s Desire. Here it’s just Broadbent and Raney, two thoroughbreds shaping an exemplary exercise in simpatico intimacy. They open with Dave Frishberg’s tenderly introspective “Listen Here,” then keep the tempo on simmer through a spectrum of major league ballads, extending from the romantic coziness of “My Melancholy Baby” and “You’ll Never Know” to the hazy heartache of “He Was Too Good to Me” and “Smoke Gets in Your Eyes.”
The pace quickens slightly for a sprightly “It Might as Well Be Spring” and a shimmering “A Nightingale Sang in Berkeley Square.” But the standout piece in this sea of marvelous tracks is Raney and Broadbent’s gorgeously realized treatment, neither too maudlin nor too wistful, of Joe Raposo’s “There Used to Be a Ballpark.”

As usual, warmth, good taste, and an especially attractive timbre are ever present on the performances by veteran singer Sue Raney on her latest endeavor. She was an early, early favorite of mine and I've never tired of her style and sensibilities. Her musicianship and very clean and unfettered sound make for something elegant and gentle, often restrained without risking becoming at all dull or emotionally aloof. And, every now and then, she'll judiciously use her formidable skill set as a vocal gymnast to remind you that she could join the singers' Olympics events if she chose to. Excellent intonation and diction add to the veteran's confidence. Melodies and lyrics are respected and relished, but never in a slavish or stodgy way. A creative risk-taker with tempi and phrasing, subtle and bold choices pay off handsomely. This is just the latest loveliness in a long series of released albums, too few and far between in recent years, that go back more than half a century now.

This time around, Sue is simply and thoughtfully accompanied by only one musician: pianist Alan Broadbent, whose instrumental solos are never indulgent or straying jarringly from what's been established. They're on the same page.

The melting ballads and soft sounds might be the strong suit here for some. The first track and title song, written by Dave Frishberg, is about heeding your inner voice, and attention must be—and is—paid: vocalist and pianist are paying attention to the general message of the lyric as well as the literalness of the command to "Listen Here." There's an urgency and seriousness, extreme focus, but also a down-to-earth, accepting spirit. Such maturity and pensiveness inform the proceedings down to the closer, the epitome of a bittersweet rumination, "Smoke Gets in Your Eyes." Enjoy the luscious high notes (on the word "true") and deep tones, too, from this melody, classic Kern, shorn of the formality that too often encumbers it in "recital-style" renditions of this 1930 souvenir from Roberta. In between there are other gems from writers of Broadway and movie scores and standards.

On many selections, Miss Raney and Mr. Broadbent make a broad move or subtle turn down a side trip to a surprising path. "It Never Was You" from Knickerbockers Holiday is often heard as a heavy lament, throbbing with self-pity, but here it's a journey through true vulnerability, making the poetic line about "the heartbreak call from a meadowlark's nest" feel real. The famously trilling bird in "A Nightingale Sang in Berkeley Square" is usually approached with hushed awe so as not to break the bubble of magic in the recollection of how two lovers met and fell in love. At first, I thought it was the CD's "oops moment," as I was taken aback by the lighter, brisk tempo employed. I thought it would destroy the fragile ambiance I'm used to with this story-song, a particular favorite of my sentimental heart. But I find that the story and fine feathered friend survive quite well, the usual gossamer grace finding a kissing cousin in what's brought out here in the more ebullient, quicker telling: joy that radiates. Similarly, there is "The Music That Makes Me Dance" from the stage score of Funny Girl, thought of as a stand-in for "My Man," the ultimate beleaguered weeper of a torch song. Think again. The "Dance" metaphor sits this one out, and a happier, lilting tempo allows us to think of it as actually about a positive, healthy love relationship making one want to dance on air. There are two melodies by Richard Rodgers: "It Might As Well Be Spring" with Oscar Hammerstein getting a refreshing airing, and "He Was Too Good to Me" with Lorenz Hart's final line of the lyric, "He was too good to be true," phrased as if being realized for the first time, whichever of the line's double meanings is being considered.

A vocal version of the theme from the 60-year-old movie The Bad and the Beautiful becomes almost a treatise on life and love with a revelatory, line-by-line exploration. It's one of many highlights. I haven't heard her recording of another film song, "Aren't You Glad You're You?," which is an extra track on the Japanese/import version. But I do know I'll be rushing to catch Sue Raney sing movie songs when she's among the singers in the 92nd Street Y's Lyrics and Lyricists concerts in the first week of June, in fine company: Rex Reed, pianist Mike Renzi, and musical theatre favorites Tom Wopat, Jason Graae, and Polly Bergen.

Sue Raney with Alan Broadbent, Listen Here (Rhombus Records)
Rifftides -Doug Ramsey
Raney is an interpreter of classic popular song whose creative gift and technical skill are matched by few singers in any category. Her empathy with Alan Broadbent was on display in their last collaboration four years ago. In that instance, her accompaniment was an orchestra that Broadbent arranged and conducted. This time, the orchestra is Broadbent at the piano, providing support and full partnership. After years of mutual admiration and occasional gigs, they have come forth with the duo album their admirers yearned for. It is a collection of ballads, but that by no means indicates that it lacks rhythmic interest. These two can swing at any tempo. That gift is striking in the medium bounce of “A Nightingale Sang in Berkeley Square.” “Aren’t You Glad You’re You?” and “It Might As Well Be Spring” with Broadbent’s “Joy Spring” introduction. In slow tunes, Raney can break hearts and moisten eyes. She finds the pathos in “He Was Too Good To Me;” uncloying sentiment in “My Melancholy Baby;” the poetry of longing in “Skylark,” “The Bad and the Beautiful” and “Listen Here,” the inspired title song with words and music by Dave Frishberg.
When Raney enters a note, it is never by a side door. When she bends one, it is to enhance mood or feeling. Broadbent comps and solos with chord voicings that enrich not just a song’s harmonies but its meaning. Their version of “There Used to be a Ballpark” could almost make you forget Sinatra’s. This collection of 13 songs is bound to become a classic,

"When Sue Raney wraps her lovely voice around a lyric, that song knows it’s in good hands. She’s always true to the words and music, yet she establishes her own style, which is just this side of incredible"---John Bohannon, WRHU Radio

So happy to read these AMAZING reviews!
love
mer