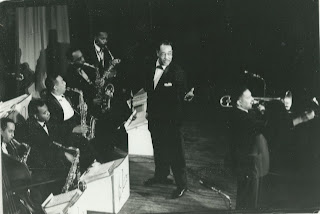 From my memoir, Early Plastic

"The next time I went was a Sunday morning, at the very beginning of a day's worth of Duke Ellington Apollo Theater stage shows. He didn't come on until the set was nearly over at around 12:30 pm, but at least he showed (jazz musicians are notorious for knowing the existence of only one eleven o'clock per 24 hours). I didn't have the good sense to appreciate being in the presence of legendary tappers Teddy Hale and Bill Bailey, who preceded Ellington that day and who I foolishly thought of as being something boring and passe that I had to sit through to get to the Duke. This was a common attitude of the day that, for a time, threatened to kill off this great indigenous American art form."

Can't even recall the name of the movie at the Apollo that day. Angel Baby? Probably split after the Ellington set.