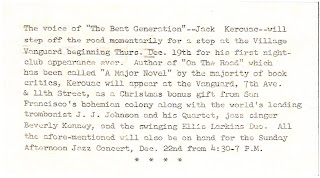 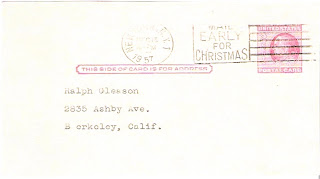 That postcard is a real find! The Kerouac connection is very special. My parents still own the house in Northport that we bought from him in 1959. I met him many times. He bought that house with the advance from "On The Road", but with sudden fame, he couldn't handle all the fans that started coming to the house so he moved.

Tommy Flanagan (the great jazz pianist) once told me a story about how Kerouac, when fairly drunk one night, went up to Elvin Jones' drum set during intermission, sat down and started playing. Elvin had to be forcibly restrained from beating Kerouac up over that. It could have happened any night during those years, but I wonder if it might have been during this gig.

There are unreleased bootleg tapes of Kerouac, but I don't have this one, if ever taped. He taped himself at home and loved his reel to reel. He had one room in the house that he just called the music room, with the deck and many reels of tape.

If Ellington's composition "A Drum is a Woman" means anything, I guess that sitting down at a drummer's set-up is equivalent to sleeping with his wife. No wonder Elvin was livid.