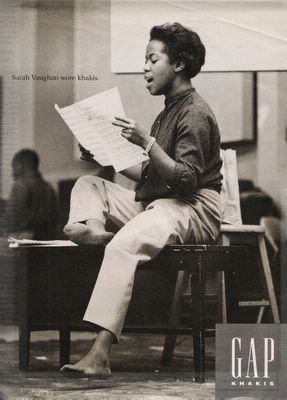 Today is the birthday of the inarguably great, inarguably legendary---hell!, Legendarily Legendary Sarah Vaughan. I saw her in person about a half-dozen times, including once with Michel Legrand's orchestra at Carnegie Hall. There, snap queens swooned en masse when she launched into her late-period signature number, "Send In the Clowns."

Another time I saw her "live" was at the local 47 AFM union hall. It was an afternoon casual, a memorial service for one of the boys. She'd just thrown on a wig and muumuu, jumped in the limo, motored in from the Valley, and there she was! Accompanying herself on piano and so close you could reach out and touch her. And at UCLA Wadsworth Hall, Hollywood Bowl and other places where I saw her perform live, she always gave 110 per cent. What a pro!

And I don't think she ever failed to get a laugh with her signature punch line where she introduced the members of the band, then added, "And I'm. . .June Carter Cash."

The late music critic and record producer (Shirley Horn) Joel E. Siegel once observed to me that Vaughan, with all the tremendous technique and the, um, instrument at her disposal, sometimes reminded him of a chappie with a foot-long racial tool in his arsenal who didn't always know what to do with the great reward with which the good Lord had gifted him. (How vivid!) But I disagree; to my ears, she never failed to know exactly what to do with...IT.

In a 2000 interview with me, singer Pinky Winters recalled the first time, circa 1950, she ever heard Vaughan sing:

"We would always stop at the trombone player's and he’d have… he said, 'You gotta hear this!' Fred Sherwood. And Fred put this record on. I’ll never forget. We were standing there and this thing came on and it was Sarah Vaughan singing Lover Man. I didn’t know that Bird [Charlie Parker] was on there. I just thought, 'I’ve never heard anything like this in my life.' My god! You can do that! And I just went home walking on stars. It was really uplifting."

Michel Legrand once told me that when he recorded his album with her, accompanied by a phalanx of "hardened" studio veterans, that when she finished her first number there wasn't a dry eye in the house. Another time, on TV, he described her as trafficking in "Music from the stars. . .the heavens."

Sometime in the mid-1980s Vaughan was appearing at New York's Blue Note, when her bass player Andy Simkins collapsed during a set and had to be taken away in ambulance. According to reports, she lit up a cigarette on stage, smoked it furiously, snuffed it out, paused a beat, then crisply called out, "Next song, please." (PS: The next night Simkins was back in action. Mere flu.) What a pro!

Not long before Vaughan died in 1990, she was recording a new album for producer Quincy Jones. She'd been hospitalized but was now back home. Ringing Jones up, Vaughan announced: "Let's get back to work." Jones reminded her that she was seriously ill and perhaps needed her rest. Her reply? "Please Q, lying down I sound just as good as ever." Or words to that effect. Like I say. . .What a pro!
Posted by Bill Reed at 12:26 PM