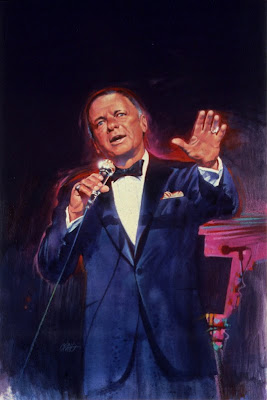 _________________
Slightly before the Punic Wars, I was an editor for the program guide for an early form of subscription/pay television known as ON-TV . One of the productions we broadcast was the initial showing of Frank Sinatra's Concert for the Americas. For the cover of the guide we commissioned a portrait of Sinatra by artist Craig Nelson. But we had overlooked the fact that that particular cover had been contractually promised to, ulp, 80s Canadian soft-rocker Gino Vannelli, who also had a presentation on ON-TV that month. And so we had to scrap a Sinatra cover in favor of one devoted to His Hairyness. And as I recall, our contract with the artist specified that the Sinatra portrait had to be used as a cover or not at all. And so. . ..


Meanwhile I snatched up a whole bunch of offprints of the abandoned cover and, over the years, have given them to my Sinatra-fan friends. I think I am now down to one.
Posted by Bill Reed at 9:18 AM