New from SSJ Records in October 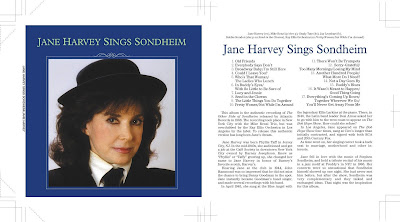 "This album is Atlantic's Record's 1988 The Other Side of Sondheim, by Jane Harvey, as it was originally envisioned. The recording took place in New York City with the Mike Renzi Trio, but was overdubbed by the Ray Ellis Orchestra in Los Angeles by the label. To release this authentic version has long been Jane's dream.

Jane Harvey was born Phyllis Taff in Jersey City, NJ. In the mid-1940s, she auditioned and got a job at Cafe Society, owned by Barney Josephson. Know as "Phyllis" or "Taffy" growing up, she changed her name to Jane Harvey in honor of Barney's favorite scotch, Harvey's.

Hearing Jane in the club in 1944, John Hammond was so impressed that he did not miss the chance to bring Benny Goodman to the spot. Jane immediately became Goodman's band singer and made several recordings with the outfit.

In 1945, she sang at the Blue Angel with the legendary Ellis Larkins at the piano. [Then] Latin bandleader Desi Arnaz heard her there in 1946 and asked her to go to the west coast to appear on the Bob Hope radio show. How could she refuse?

In Los Angeles, Jane appeared on the Hope show four times, sang at Ciro's longer than initially contracted, and signed with both RCA and 20th Century-Fox.

As time went on, her singing career took a back seat to marriage, motherhood and other interests.

Jane fell in love with the music of Stephen Sondheim and held a tribute to him in a jazz vein at Freddy's in NYC in 1986. Her concerts were so sensational that Sondheim himself showed up one night. She had never met him before, but after the show Sondheim was very compimentary and they talked and exchanged ideas. That night was the inspiration for this album."
__________________________

Aside from being available in its original small group format for the first time, two other things differentiate this version from its original release: the addition of four never released tracks AND a new 2009 recording by Jane of "Send In the Clowns" to replace the original one that she feels was sonically inferior. Her voice sounds unchanged on this, her first recording in more than two decades.

Although I had no participation in this particular SSJ Records release, nevertheless its issue resulted in my fortuitously having lunch with Jane Harvey twice over the past few weeks. I came away from both occasions with the sense that she is --- as they say ---one really one sharp cookie. It feels/seems to me as though she has never forgotten anything she ever once learned, experienced or knew.

It turns out that she and I are both major fans of James Gavin's recent bio of Lena Horne, Stormy Weather. So much so that she has been going around to stores requesting they display the book prominently. . .if it is not being done so already. In passing, I said to Jane over coffee, "It is not so much a biography as it is an adventure novel." That is to say, put the book in the hands of just about any halfway literate person and it becomes a real page turner. The trick, of course, is how to direct their maws to it in the first place.

For the record, Jane IS NOT retired. She is still very much interested in performing. Something quite wonderful in that regard might happen very soon. Stay tuned and when and if it comes to pass, you'll "hear" about it right here. 10/11/09 Update here.