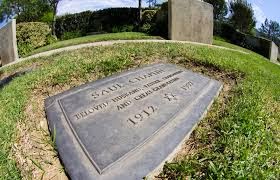 Today is film producer/songwriter Saul Chaplin's 102nd birthday. Some time ago, I was a runner between une certaine soundtrack composer and Chaplin's respective domiciles. The latter would always make me wait outside while he fetched the package for the former. Sometimes it took him ten or fifteen minutes. One day it was unbearably hot in Beverly Hills and I discreetly asked if I might wait in the air-cooled hallway, instead. To underscore my trustworthiness, I added that I was actually a personal friend of the film guy. "I know that, but I don't care who you are. You'll still wait outside," he growled. Guess he was afraid I'd rip off his Oscars. I also know of at least two songs that he claims to have co-written, but didn't. Bought them outright for a few shekels (that's Italian) from a couple of hard-up songwriters. A common enough practice back in the before-time; however, in the final analysis, the world is probably a .  .  .oh, never mind.
Posted by Bill Reed at 6:06 PM