It Was Fifty Years Ago Today 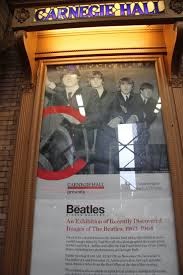 It might be arguable as to whether I was earliest in Manhattan to buy a copy of the epochal "Meet the Beatles," but I was unquestionably the first to plunk down my money for their February 12, 1964 Carnegie Hall concert. I had surmised they might be appearing there sometime between their two Ed Sullivan TV dates on the February 9th and 16th. I was right. The only one in line the morning the Carnegie box office opened, I bought two tickets for a ridiculously low $ 15. Duckets in hand, I left the box office, and already police lines were in place to control the hundreds of Beatlemaniacs suddenly descended upon Carnegie mere minutes after the first radio announcement of the event. If only I could have channeled my talents along more societally productive lines than outguessing masses of crazed Beatle fans. In honor of the occasion, when "B" day arrived, I got ripped on something called 20 mg biphetamines to become the most stoned I had ever been in my life up to that time. I was accompanied by an equally crazed and stoned friend, now a tenured U. Mass lit prof. Liz Taylor stood in front of me in line, as did Happy Rockefeller, wife of New York state's governor. Which caused me to think that maybe there was something to the egalitarian message being propounded by the Beatles after all. The thing I remember most about that 1964 night is the screaming---like all the tape loops in hell going off at once. They wore identical mod gray suits, and were still not too proud or hip to do the crowd-pleasing bit where they put their heads together, shook their mop tops and sang "Ooooh" on "She Loves You." Then the crowd really went wild. At one point, I looked down from my perch in the second balcony to espy someone in the first tier having to be restrained from leaping headfirst to the main floor. (Maybe we're not so far removed from the Mayans after all.) In response to a reporter's remark that the audience was so loud you couldn't hear the music, one teenaged female fan Zenfully (and immortally) replied: "But I already know the words."

Writers often mention the screaming, but rarely mention the small flash cameras that nearly every girl had. The audience sparkled during the entire 30 minute concert.

It is interesting to realize that The Beatles only played concerts in NYC four times (Carnegie, Forest Hills, and two at Shea). No one seems to remember the 1964 shows, which is odd because that year was the height of Beatlemania.

I knew a girl who won a ticket to see the Beatles at Shea in 1965, to be accompanied by the radio DJs. Her father would not let her go. After the show, the DJs visited her house to present her with a pen that all of the Beatles had kissed. She and her pen were the talk of the school. It was not until many years later that she realized the Beatles had never come close to that pen or those two local DJs from upstate NY.