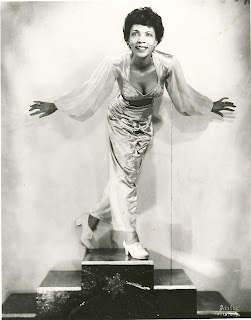 Part of a post about my friend tap dancer-character actresss extraordinaire Frances Nealy (1918-1997) that I uploaded here in 2005; and now, with the addition of a demo reel that helped Frances secure film and TV work, and a portion of an oral history I conducted with her for the California African-American Museum. By the way, I don't think that the movie that Frances made with Brock Peters, a clip of which is on the reel, was ever released.  In fact, I'm not ever sure that it was completed. Too bad; it looks as if it might have had some potential. She is very funny here. . .very remindful of the way she was off-screen. Needless to say, I miss here. Just like so many of my other (mostly somewhat older) friends who have also bought the farm, and who include the diverse likes of (namedropping the dead): Fayard Nicholas, Frances E. Williams, Tony Holland, Demas Dean, Sandy Kadet, Leonard Reed, Lou Levy, jazz photog Ted Williams (definitely NOT the ball player), Joyce Collins, Jimmy Wyble, and Nat Shapiro. Like one local wag, Noel Coward, once said, "If your friends only last through lunch. . ."
"Frances' best friend was actress Cora Lee Day. She was one of the stars of Julie Dash's terrific film, Daughters of the Dust. Not long after Frances died in 1997, I was driving to the grocery store, saw Cora standing on the sidewalk and pulled over to chat. Mostly, we talked about Frances. Cora Lee, who was the last person to see her alive, told me that Frances had tapped out a time step on her (Cora's) palm and then passed. I got so verklempt when Cora told me the story that day that I had to turn around and drive back home. I'm all better now, thank you.


I was always astonished by the fact that in all of her 79 years, every penny Frances ever earned had come from show business, especially as a fairly big (perhaps "respected" is the better word) fish in the smallish pond of tap dancing. As for Cora, for a brief, mercurial (and hysterically funny) moment in time, she was also a professional jazz singer, but I'll save that one for some other time.

Frances Nealy was the classiest and most dignified creature you can imagine; the sort who never took the garbage out unless she was dressed to the nines. That's the way old troopers were.

Not long before she died, I happened to look out on her terrace and see an American flag stuck in one of the pots. I had never known Frances to be unduly patriotic, and so I asked:

"Why do you have that flag out there?"

"Oh, honey," she said. "That's pot. But if I stick a flag in there and anyone happens to come snooping around they won't pay any attention to it."