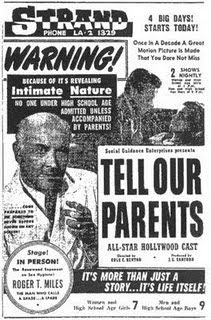 From my memoir Early Plastic and this chapter about growing up with the movies in my hometown of Charleston, West Virginia:
"Mothers of America let your kids go to the movies!," counsels poet Frank O'Hara in his salute to the golden age of movie going, "Ave Maria." And go to them we did in droves in the 1950s, whether our parents knew we were at the "picture shows" or not. . .and not always with whom. Shortly after The Debonairs poured elixir of soul on troubled waters at that high school assembly, a daringly integrated bunch of us went to see the movie Island in the Sun together. We cheered when Harry Belafonte touched Joan Fontaine's hand, but finally booed when they copped out and didn't lock lips. The rumor was that they kissed---a movie first---and we were mightily ticked off when they didn't.
We saw the disappointing Island in the Sun at the Kearse; one of three big movie houses in town. The Kearse showed Twentieth-Century­Fox "product," along with Buena Vista-Disney; the Virginian exhibited Warner Bros., Paramount and Universal; and the Capital had a lock on MGM and RKO. One other downtown theater, the Rialto, located in an office building, exhibited fare that no one else wanted to show (or see for that matter). It was there that I viewed such oddities and major studio castoffs as The 5000 Fingers of Doctor T, (a theme double bill, both were about floods in rural communities and both starred Jo Van Fleet) consisting of  This Angry Age (featuring Silvana Mangano) and Elia Kazan's Wild River; Russ Meyer's The Immoral Mister Teas, and somewhat harder later on (although not X), films like Suburbia Confidential. I saw it several times, not so much for the sex as for its inadvertent surrealist content, which included scenes of a reflexively heterosexual man romping around in his wife's undergarments, only to get caught in the act by a surprisingly sympathetic mate, and another wild swing 'n' swap pair who get off sexually by pouring (shades of Anita Bryant) containers of orange juice over one another. In later years, Ed (Plan Nine) Wood scholars have denied the director's participation in this soft core messterpiece; but if not by the master himself, it was certainly "school of Wood." It was also at the Rialto that I witnessed a strange little number about a walking, talking TV set, The Twonky, directed by Arch Oboler, and starring Hans Conreid. I recently came across an article about this "Lost Rarity of Film and TV From Decades Past," in which its producer, a chap by the name of Sidney Pink, declares the film a "$300,000 mess." Many years later, however, I continue to remember The Twonky (which its producer claims almost singlehandedly managed to kill off the Sci-Fi film genre) as being. . . swell. The Rialto also exhibited occasional first-run fare that had worn out its welcome at the Virginian that had need to clear the decks for some hot new Hollywood hit.

In addition to the Rialto, there were approximately twenty other smaller, second-run, double-feature neighborhood theaters in Charleston, including two---the Greenbriar and Lyric---on infamous Summers Street, which were parentally off limits to all but trashiest of local youth due to their regional resemblance to Bowery grind houses. What it was we were supposed to be avoiding was never exactly spelled out to us by our parents, but had something to do with rats nibbling on your toes and about winos (perhaps nibbling on other parts of your anatomy). The Greenbriar was where they played producer Kroger Babb's cycle of films like [click the link to listen] Mom and Dad (aka Tell Our Parents---"separate showings for men and women and a nurse in attendance at all times"---which seemed to come around every six months or so. [I later learned after writing this that Mom/Tell was not a Babb film but only School of Babb.] Occasionally, the Greenbriar even got religion when local church groups "four-walled" the place for showings of regionally-filmed, cheesy bible pageants featuring cross-eyed Jesuses and hillbilly Marys. These were a genre unto themselves.

TV was still a novelty and the big movie houses in town were open seven days a week from noon to midnight, with the noon weekday shows (adults, fifty cents; children, a quarter) occupied by a handful of straying housewives and perhaps a couple of kids, like myself, playing hooky. I can still vividly recall the way the sound bounced off the walls during these sparsely occupied times as the images were thrown on the screen non-stop- the lights never came up. The Lyric was topheavy on westerns, and when the bus from the coal mine camps pulled up in front of it on weekends, nearly all the passengers would empty out into it in an ant-like trail. In his essay on the movies, "The Devil Finds Work," James Baldwin observed that people did not go to see Humphrey Bogart as Sam Spade, but Sam Spade as Humphrey Bogart. If that's true, then who were these obscure (to me) Vera Hruba Ralstons and Jane Frazees advertised on the one-sheets outside the sub-respectable Lyric and Greenbriar where Monogram and Republic films had their local premieres? Who were these Weaver Brothers and Elviry, and the Three Mesquiteers? I was destined never to find out. Only when the original Godzilla premiered at the Greenbriar---and I was fairly along in my teens---did I dare enter its dreaded inner sanctum. In the final analysis, my upcoming loss of virginity proved easier than my belated first visit to this long-maligned movie house. A childhood's worth of parental bad press accorded the Greenbriar died hard while my heart beat like a hammer as I skulked my way into the place and found a seat. I felt rejected when the movie was over and I had not been advanced upon by a single one among the Raincoat Brigade's number. For as long as I could remember, authority figures kept warning me about a dangerous strangers at the Greenbriar, Lyric and elsewhere, but none ever materialized.

There was also a foreign film house in town, the Best Art, but since it was an hour and two bus transfers away from where I lived, I never went there much (besides. . . who were these Alec Guinesses and Jean Cocteaus anyway?). The Best was the theater of choice of professors from the two local colleges, and chemical plant executives from out-of­state (who tended to be Unitarians). The State in the east end of town also tended toward foreign and more recherche film fare.

A few years after I saw Godzilla at the Greenbriar, I finally succumbed to the lure of the Lyric when a triple bill of Joy House (Lola Albright and Alain Delon!),Who's Been Sleeping in My Bed (Dean Martin and Carol Burnett!), and Lady in a Cage (Olivia De Havilland and James Caan!), whose scandalous reputation preceded it (but which no other theater in town would exhibit) proved too much for me to resist. A tribute to castrating mothers the world over, this tale of a nasty, rich woman trapped in her private elevator while a gang of street trash stage a murderous orgy in her house-right before her eyes-may well have been the last non-porno film to incite rampant controversy. A kind of Oedipus in Tarzana, "Cagey Lady" was totally minus any redeeming social value, with all the characters looking like they had stopped off to visit the film on the way from one genre to another: "Why are they showing these people on the screen?" reviewers cried out. The experience proved well worth all the rats scampering over my feet and the gum stuck to my shoe soles it cost me to view this Citizen Kane of sleeze during my maiden foray to Charleston's notorious Lyric; which fittingly, not long after, became the first theater in town to go "Triple­X." It wasn't until years later at New York revival houses that I saw films in the sub-Technicolor process, Tru-Color (films in it were shown almost exclusively at the Lyric and Greenbriar), and realized what I had been missing all those years; blues and greens and reds you could eat with a spoon---like Joan Crawford's lips in Johnny Guitar, which seemed to float twenty feet in front of the screen. Alas, no one laid a hand on me at the Lyric. It wouldn't have counted anyway; by that time, I was almost "legal. I still hadn't completely figured out sex, but I craved acceptance, no matter what form it came in.

More about Mom and Dad/Tell Our Parents
In addition to reading from and signing copies of my book Hot from Harlem, I'll also be flacking copies of Early Plastic at 7 pm tonight at L.A.s Book Soup.
Posted by Bill Reed at 7:42 AM