The presence of palpable GENIUS 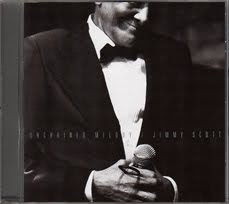 1. All Of Me
2. Imagination
3. Unchained Melody
4. Bye Bye Blackbird
5. Day By Day
6. Jealous Guy
7. All Or Nothing At All
8. Sometimes I Feel Like A Motherless Child
9. I Cried For You
10. Everybody's Somebody's Fool

In 2001, a manager of Jimmy Scott's---no names please, not even initials---contracted the Japanese label Tokuma to record and release this "live" recording. The only problem was that Jimmy was under contract to another record company at this juncture. Whether there was a connection or not, shortly after the debacle Scott terminated his relationship with the manager. The CD was quickly withdrawn and rapidly escalated in value. Today, it sells for fairly big bucks.

I was there in Japan that night when the CD and video (eventually shown on Japanese TV) were recorded at the b flat club in Tokyo on October 17, 2001. Jimmy and I had not seen much of one another since the early nineties and it was great to do catch-up between sets. I was astonished at how jammed the club was, even at 6 pm of a weekday. People hanging from the rafters (Jimmy is considered rather une grande vedette in Japan).

Jimmy and I go back together even before his big comeback around 1990. Then, in November 1991, he came out to Los Angeles to do a week-long engagement at the Hotel Roosevelt's Cinegrill. In 2002, author David Ritz interviewed me about the gig for his bio of Jimmy, Faith in Time. He quoted me in the book as follows:

"It was an auspicious moment, a glamorous affair. I had discovered Jimmy through [the album] The Source  a few years earlier. I remember asking Gerald Wilson, one of the arrangers of Jimmy's Tangerine album, whatever happened to Jimmy. 'He's dead,' Wilson said. So when I learned he was alive and well, I was thrilled. We became fast friends. I'd never met an artist so friendly and open. On opening night, all the stars came out. Bonnie Raitt was there, and so was Paul Gayten, Jimmy's musical partner from the early fifties. There was widespread media coverage, big crowds and enthusiastic response. Jimmy looked resplendent in his tux. It was a happy occasion but also sad. For all the hoopla, Jimmy was so broke he didn't have enough money for food. I had to give him and [his then wife] Earlene fifty bucks to buy dinner. I also helped him set up a stand in the hotel lobby to sell his CDs and tapes."

I picked Jimmy and (then wife) Earlene up at LAX when he came to L.A. for the gig, and before even going to the Cinegrill to check in, we drove out to the Pacific Ocean for a walk on the beach. As we slogged along through the sand, I can recall Jimmy's talking about his plans for starting a kind of show biz academy for training young hopefuls. I don't think he got very far with this. Most likely because, shortly thereafter his career took off like a rocket, not just nationally, but internationally as well. Replete with fashion shots in Italian Luomo Vogue and giant record release posters in Tokyo bus stops, etc. Not quite on a par with Sinatra's post-"Eternity" comeback, but pretty wild nonetheless. Besides, "comeback" is not quite the right word, for prior to this Jimmy Scott had been almost exclusively known to the black community, and what soon transpired with his career was highly extra-racial. Besides, most blacks of un certain age had never really forgotten him in the first place.

I was in Jimmy's dressing room just before showtime at the Cinegrill. I marvelled at how shined to the max his blacks pumps were. "That's the way we old show biz troopers are," he laughed. Then he jumped up, shouted "It's showtime!" And with his right arm linked in Bonnie Raitt's and his left in mine, we strode off down the hallway to the Cinegrill. It was an exciting moment that I'll never forget. Jimmy killed that night and each subsequent one of the engagement.

If you want to get technical about it, I was not even aware that author David Ritz had interviewed me for the bio until I bought the book, read it and happened upon my name somewhere around page 200. For the life of me I could not recall having spoken with Ritz about Jimmy. Eventually, however, I recalled a phone conversation with Ritz about something else entirely; and he, somehow, brought the the conversation around to the subject of the singer. And, lo and behold, it seems like he just happened to have his tape recorder engaged at the time and plugged into the phone. (Or else, he's a super shorterhand whiz.) Later, I asked Ritz about the incident. "Oh, I can be kinda sneaky sometimes," he laughed. In the final analysis, I couldn't have been less p.o.'d about being bugged. Anything for Jimmy.

Others on hand for various nights of the engagement included Ruth Brown, Nancy Wilson and, ulp, Phil Spector. Just an instant before I espied the latter in the lobby of the Roosevelt, I remarked to my friend David (if you don't want to believe me, you don't have to), "I sense the presence of palpable evil." I then turned and there was Spector coming right at me surrounded by no less than a phalanx of bodyguards. eeeeekkkk!

Despite unbelievable career-long obstacles, i.e., greedy managers (again. . .no names, puh-leese), shady record producers, health issues, booze, failed romances and marriages, crooked club owners, etc., Jimmy Scott has prevailed. Heading into his 85th birthday (July 17th), he continues to peform internationally and to record. On May 8, 2010, he headlines at the C. C. Amphitheater Las Vegas, NV. And my guess is that it won't be long before he heads back to Japan (for a seventh time) to perform there again.

Available for download for the next 48 hours only.
Posted by Bill Reed at 4:34 PM

WOW! Thanks for this. I have been a big fan of Jimmy's for nearly 20 years. I owe a lot of my musical exposure to CBC radio. In the 90's I had the habit of working with a walkman radio on and would listen to CBC and I would right down anything interesting that came along. Thats were I found Jimmy.

This recording is amazing. I have only listened to it all the way through a couple of times so far ... but I am really overwhelmed by how good it is. I have oftened prefered Jimmy's older recordings ... but right now I can't imagine why. This is really spectacular ... the band is so tight and the song selection stellar ... I am particularly enjoying getting teary to "Jealous Guy". I think some of my favorite recordings ever are Nina Simone at the Village Gate, Sarah Vaughan at the Tivoli ... and I am getting the same sort of feeling from this. Great Band, full range of songs that go from inimate to joyous to knocking down the house. THANK YOU for you your generousity.

It is a pleasure to share these things. I feel that I have an obligation to make available recordings which are, in almost every case, sides that will never be available to lovers again.