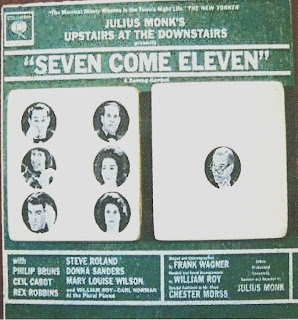 
Even though this recording of the 1961 Julius Monk review Seven Come Eleven was given a Columbia Records catalog number, the album was never actually released and distributed. Instead all the copies that were sold were done so exclusively at the venue, Upstairs at the Downstairs, where the revue played. Somewhat valuable and hard to come by, I sold my copy for fairly big bucks several years ago. But not before making a CD burn of it. Available at this site for the next 48 hours.
Hear here
Posted by Bill Reed at 1:21 AM

It was released on CD by Masteworks Broadway in 2013.