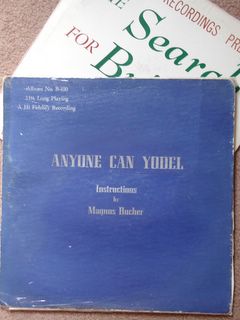 You just never can tell what you'll find at the Goodwill. A few years ago---IN THE PARKING LOT YET---I made the acquisition to my, um, already eclectic LP collection, of "Anyone Can Yodel". Nope, it wasn't the new Stephen Sondheim country musical, but a yodel instruction disc. Unfortunately it isn't by the late, great Judy Canova, but instead by a certain Magnus Bucher, who does not elicit so much as one single hit on Google. Even my dry cleaner gets one or two!

Unfortunately, the disc itself was shattered, but still the jacket is a keeper. Maybe the purchaser of the lp just got fed up with the instructional results and hurled the disc across the room? Could it have been Joe Reber, whose name is written in faint ink on the back? Inasmuch as there is exactly one person by that name in all of this here state of California---annals of Googlery---in Apple Valley, yet, I bet he's the one!

Apple Valley is where the Roy Rogers and Dale Evans Museum is located. Which reminds me. I think I'll drop by some afternoon soon to see if the gift shoppe has any Dale Evans' Marshmallow Treats (Roy's favorite) for sale. Or maybe I'll just whomp up a big batch here at Oblivion Acres. Simple enough:

1. Melt butter in 3-quart saucepan. Add marshmallows and cook over low heat, stirring occasionally, until marshmallows are melted and mixture is syrupy. Remove from heat.

Of course, t'would be nice to drop by Apple Valley just to see how Trigger's holding up. To wit:

NEWSWEEK, April 11 1966. Roy Rogers has sent the remains of his famous horse to a taxidermist. Trigger retired to pasture in 1959, and now it develops that the white-maned palomino rode into his final sunset last July at age 33. "I really was shook up when Trigger passed on," Rogers told a reporter last week. "I just couldn't bury him."

And while we're on the subject of the King of the Cowboys, here is a Japanese senryuu for urging children to bed (author anonymous):

"One who is asleep
Is the very first to smile
And to be as Roy!"

Bill, this is a HOOT! And great haiku at the end. How sweet, and really fun. You have, of course, the great Mary Schneider CD, Australia's Queen of Yodeling...
Lovely careening through the Valley tonight with ya'. You can get me a Thomas' Guide for my birthday.