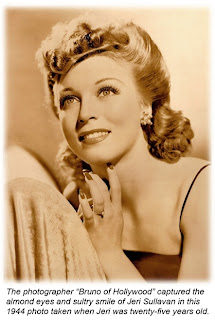 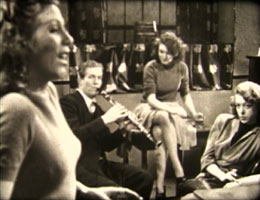 Here's commentary on the above Jeri Sullavan Soundie from the WeirdWildRealm website:

"Though copyrighted in 1945, this Jeri Sullavan soundie Memphis Blues was filmed in 1942. Jeri was a big band singer of merit, & in A Song is Born (1947) when you see actress Virginia Mayo singing, that's actually Jeri Sullavan's voice; & in Love that Brute (1950) you're hearing Jeri while Jean Peters appears to be singing.

For Memphis Blues she proves herself a good basic swing vocalist, praiseworthy even if not unique. The setting for this soundie is a run-down little club.

A clarinet player is seated nearby. A cigarette hangs from the pianist's lips. The camera pans across the small audience at tables & finds Jeri singing from the opposite side of the small club, away from the musicians, leaning on the bar much as did Bessie Smith in St. Louis Blues (1929), which was in fact directed by this little soundie's director!

The number commemorates W. C. Handy's blues compositions, but Jeri's not singing one of Handy's songs. With little dubious romanticisms, the lyric runs in part:

"I never will forget the tune that Handy called the Memphis Blues/ That melancholy strain/ That ever haunting refrain/ Is like a darky moaning a song..." It's just a mite too precious to praise more than a little.

In fact, that IS Handy's lyric. One of his most famous ones at that. Not bad for such an allegedly "precious" piece of songsmithery.
Posted by Bill Reed at 12:57 PM

Awesome. Thank you Daddy-O for the Jeri Images!! The face matches the voice.
JohnnUSA