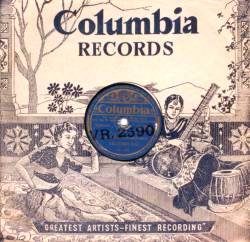 For the past several days on this blog I have been putting up mp3s of my fairly extensive vocal jazz collection here at Oblivion Towers. But that is not all that I collect. I also specialize in Indian Original Cast Recordings of Broadway shows.

You would be surprised at how many such recordings exist. For example there are actually India cast recordings of two failed 50s B'way musicals, "Flahooley" and "Whoop-up" (urp) both of which barely made it to disc in the U.S. The star of the former is Indian 5-octave wonder, Yma Poon.

What nearly all of these have in common is that they appeared on 78s as well as on their rpm-challenged cousins (by the time of MFL in the U.S. 78s had gone the way of the horse and buggy). The reason being the ongoing lack of electrification on that continent well into the 50s. Thus the need for many Indian afficianados of the Broadway musical to rely upon the old standby, the handcranked 78 player. ("Oh, Mary, you crank this time. My arm's tired.")

Some of these recordings even sported translations into one of several Indian dialects. And you haven't lived until you've heard Robinson and Solt's 1954 "Sandhog" rendered in Hindi.

But while Lerner and Loewe's classic "My Fair Lady" was almost always translated into the main language of the nation where it was being performed, due to the large British population and the high degree of English language facility of the educated indigenous population of India, in that country MFL was both performed and recorded in English. The only major change being that the male lead is called "Professor Umbelli" and instead of transforming Eliza in a proper English lady, her Svengali is going to attempt to, as he says, "Make you a touchable."

Here then is "Wouldn't It Be Loverly" (link for a limited time only) from the six 12-inch disc 78 rpm set (it's a wonder they didn't sell the damn thing with a truss) of the New Delhi production of "My Fair Lady."
Posted by Bill Reed at 9:16 AM