'Tis the season for autograph hounds 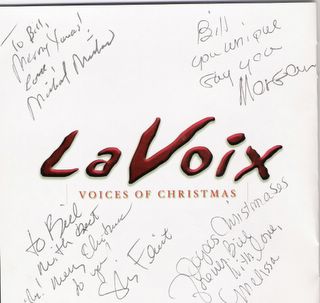 Now it can be told. The group alluded to in my blog entry of last Sunday, La Voix, is in reality the West Coast group of session singers, Inner Voices. And for quite a few years now they have presented an annual Christmas music concert at this city's (L.A.) Jazz Bakery. I would go so far as to call the occasion, in these increasingly transitory and superficial times in which we live, something resembling an actual---pace Tevya--- tradition. And for good reason. These four Inner Voices (minus soprano Julie Delgado, off touring somewhere in Europe with---gakkk---Rod Stewart) constitute, singly, collectively and inarguably, the Rolls Royce of such assemblages. Go from one end of the radio dial to the other and you're bound to hear at least one, several or all of their voices singing commercials or back-up on recordings.

Most of the concert was a cappella, and while it has been my pleasure to hear a few other fine such groups in concert (most notably Take Six), before last Sunday I've never had the chance to witness the creation of music like this in such close proximity.

After the show, and somewhat in jest, I said to Morgan Ames, the leader and arranger, "I always thought there might be some element of trickery in such affairs. But now, up close, I can see that it isn't smoke and mirrors at all, but, instead, just plain old meticulous, arduous advance preparation." Somewhat the most endearing aspect of the afternoon was that it all seemed, even from a few yards away, so fun and spontaneous. None of the quartet nor their guest artists, Andrea Robinson and Jim Gilstrap, even appeared to break a sweat. (It's called ACT-ING.) The act of proficiently performing from memory a two-hour, four-vocal-part mostly a cappella concert seems to me like a daunting one.

These superb artists---Morgan Ames, Shelby Flint, Michael Mishaw, Melissa Mackay---sang mostly acappella and missed not so much as a beat throughout (hard enough for most professional vocalists to intone the mere melody of one song entirely on key). There might have been one minor mistep. I could tell by the way the foursome joshed with one another briefly after the song, but it was far too subtle to have been apprehended by all but the most meticulous and schooled of listeners in attendance. (If you prick Inner Voices, do ((even)) they not bleed?)

The repertoure ran the gamut from the traditional "I Wash My Face in a Golden Vase" to "Jingle Bell Rock" done as a samba. Finally, the afternoon's highlights were far too numerous to mention, but Flint's high notes on Handel's Messiah were a wonder. Especially because they seemed so effortlesly produced. Standing ovation time. Of course, afterwards she nearly collapsed after from the sheer sense of. . . Did-I-just-do-that?

Too bad I will apparently have to wait for another whole year before the next coming of Inner Voices "live." Meanwhile, will someone please secure these guys a much-deserved endorsement deal with Evian bottled water?
Posted by Bill Reed at 8:11 AM