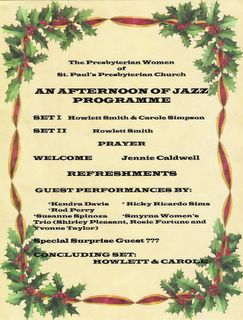 Yesterday I attended a delightful Sunday afternoon jazz concert given by two L.A. musical landmarks, the wonderful Howlett (“The Grass is Greener”) Smith, and Carole Simpson, whose lone major label album, on Capitol, All About Carole, has always been in print somewhere in the world during the nearly fifty years since she recorded it in 1957 (my CD copy comes from Czechoslovakia).

Though there have been a couple of other minor releases by Simpson, this is basically it. “All About” (cliquez ici s’il vous plait) has remained in print since its inception in (still) musically literate Japan where her minor-label Tops LP now fetches big bucks on the collectors' market.

The occasion had all the necessary requisites to get me out of my cocoon here at Oblivion Towers! 1. It was nearby 2. Free 3. In the daytime 4. And a priori certain to be a quality affair.

The venue was a Sunday afternoon holiday social held at a local Presbyterian Church here in L.A. (the city where the future comes to die) where Howlett and Carole serve in the capacity of Sunday morning hovering musical gurus. And while a collection plate was passed midway during the affair, still the five bucks I plopped into the plate was a small price to pay for the musical enjoyment proffered by these two musical vets.

Seated on risers behind twin electric pianos (she a Yamaha, he a Kurzweil) , the pair knocked out a dozen or so duo piano renditions of standards, alternating between solo and duet vocals, on such as “Getting to Know You,” “Fly Me to the Moon,” “S’Wonderful,” “Jingle Bells” (“Can we make this jazz?,” Howlett mused aloud to Carole. And they did!), and an especially memorable solo by Howlett, WHISTLING, on “Come Sunday.”

Between numbers, Carole and Howlett (longtime musical compatriots) engaged in a kind of post-bop Bickersons badinage that the large assemblage seemed to appreciate almost as much as they did the music qua music.

Lots more transpired, including sweet but less than entirely memorable turns by some of Howlett’s students. Still. . . knowing what I know now, I’d travel far, at night yet, and pay big bucks to do it all over again!