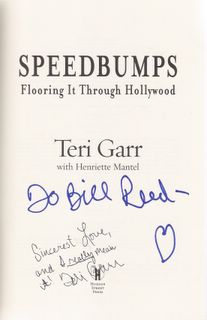 Not one to gush over celebs---i.e., meeting, breaking bread with, litigating against, stalking, and even more speakable and unspeakable interfaces with ---one of the few of the lot that I've always wanted to encounter or at least be in the same room with is Teri Garr. And last Thursday night at L.A.s Book Soup, I finally had my chance!

I wrote about the forthcoming Garr booksigning event a few weeks ago here . And for me to brave driving the Sunset Strip late into the holiday season, you have to know I wanted to be there reallll bad.

As most know by now, Garr has finally been diagnosed with multiple schlerosis after more than a decade of uncertain and altogether MS-diagnoses. (The valium sleep-torture rack treatment as described in her wonderful and funny new memoir, Speedbumps reads just like something out of the Middle Ages.)

A nice and adoring crowd was there to meet her, not one of whom grumbled a bit as time wore on and Garr was more than a half-hour late. Mumbling something about traffic as she made her way to the lecturn under her own steam and with daughter Molly in tow, the radiant Teri had the audience eating out of the palm of her hand from start to finish.

I am happy to report than while MS may have somewhat slowed Garr's stride, all of her essential Teri Garr-ness is still intact. As it turned out, it was one of the few delayed pleasures I've ever meditated upon that lived up to my expectations. Just as I hoped, she was alternately droll, wise, and hilarious by turns, often so quickly as to engender whiplash.

A question that I wanted to ask Garr was something she partially addressed right off the bat; i.e., her acknowledgement that the initial title of the memoir was the wonderful one of Does This Wheelchair Make Me Look Fat? (She also said that she'd contemplated calling it The Joy of Handicap Parking!!!) And so in the Q&A session that followed her reading of sections from the book, when I asked her why she had changed the original title to the somewhat ho-hum Speedbumps, her co-writer, Henriette Mandel, in the back of the room answered for her: "She caved," she shouted out. After the audience had their good laugh over that, Garr did not exactly answer my question, but it was obvious from her attendant equivocation and fumfering (in her mouth, fumfering is elevated to high art) that the Good Taste Police at her publishers had stepped in.

There are two signatures on my copy of Speedbumps, obtained last Friday evening: the regulation "To Bill Reed" with the heart shape AND "Sincerest Love. And I really mean it." The latter is actually a stamping machine that Garr carries with her and uses whenever her writing hand gives out. Fortunately, she was feeling no pain that night and gracefully gave every book buyer a double dose of her autograph.

In turn, I gave her a copy of MY memoir, Early Plastic, published by Landfill Press. I hope she reads it.