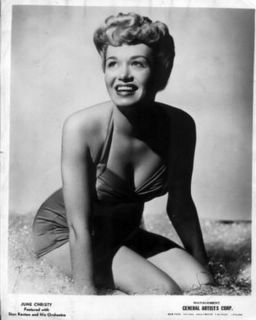 To the best of my knowledge, this June Christy 45 (link for a limited time only) with Jonah Jones has never been released on a LP, CD or "all other improvements and devices which are now or hereafter may be used" (to quote from the famed Peggy Lee vs. Disney lawsuit). It is from Bock and Harnick's Tenderloin and represents Capitol Records' 1960 attempt to get jazz singer June Christy on track as a commercial recording artist. And they continued unsuccessfully to do so before finally throwing in the towel after the failure of her 1964 Something Broadway, Something Latin.

The first time I heard I heard this final Christy LP for her longtime label, Capitol, it was obvious that an edict had come down from "suits" on high in the Capitol Tower to either sell out or get out. There are several very commercial tracks on it, replete with plink-plink-plink piano triplets, and the few more-or-less listenable cuts are by far the most pop-ish things she ever recorded. It’s the one dubious album she ever made, and that includes the disappointing 1977 Interlude, issued initially in the U.S. on the Interplay label. MORE
Posted by Bill Reed at 9:57 AM