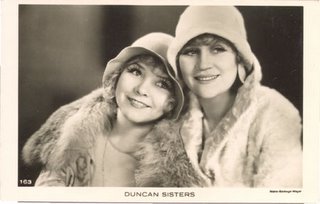 Hello Bill Reed: I just discovered your blog and I really enjoy it. Love learning about jazz music and vocalists-- especially enjoyed your interview with Jo Stafford on the "Songbirds" website. But ya gotta let us know the identity of the singing duo you featured on December 4! The song is so saccharine and upbeat . . . It lingers, like a haunting refrain. Who are the mystery artists? I couldn't begin to guess-- The only performing sisters from the 1920s that I know of are Lillian and Dorothy Gish-- film stars, not vocalists. Could you let us know the answer to the musical question in an upcoming post? Thanks very much. Cheers, Dave.

Why sure, Dave. "Twimmin De Cwismas Twee'"---ulp---was one side of a 45 rpm by the once widely-known---how quickly we forget---Twenties duo, the Duncan Sisters. It was issued sometime in the early 1950s, when they were long past their prime, on the fine, fine, superfine label, Duncan Disc. To the best of my knowledge, this is the only release on the label. The flip side is---gakkk---"Dear Santy."

Here is what one site has to say about the Duncans:

"The Duncan Sisters could seem an anachronistic joke to those who never saw them perform. Unless you have been fortunate enough to view their early sound film, It's A Great Life, it is doubtful you have ever witnessed their charm and originality. Today, if any photo accompanies some mention of them it is usually one depicting their Topsy & Eva act. With Rosetta in blackface, it suggests something beyond the pale and reeking of common racism, but Vivien and Rosetta were never vulgar or offensive and their skill with close harmony singing, dancing and clowning made them one of the top acts in vaudeville."

Another site that I found tells you more than you probably will want or ever need to know about the girls.

I had a picture sleeve of the Duncan 45 around here at Oblivion Towers, and that I was gonna post, but not even the archelogists from all those U-I Mummy pix of the 30s would have been able to find it and so you will just have to content yourself with the entire version of "Twimmin'" instead (we aims to please). To the rest of the readers of this blog---and you know who you are---forewarned is forearmed.