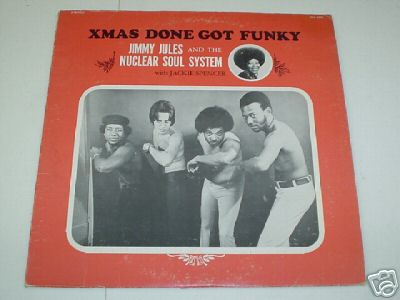 . . .the old xmas lps and CDs once more. Each year I pledge that after this yuletide I will consign the lot to a festive post-holiday bonfire. But still they prevail in the closet and even unto the crawlspace above my bedroom.

With the exception of a few titles, almost all of them---even the jazzier ones---are just not all that great. Maybe that's why I don't tend to listen to them the other months of the year? Could be.

One guilty pleasure that I do have a weakness for is the Stan Kenton xmas album. Curious, inasmuch as it is arranged by a decidedly non-jazzy arranger, the stodgy Ralph Carmichael. Maybe Stan had Bill Holman or Shorty Rogers go over the charts after Ralphie handed them in. The end result is a rather stately, yet swinging affair. I always play it while trimming the tree each year. It's---I believe they call it---a tradition around here at Oblivion Towers. In my heart of hearts, I'm guess I'm still such an old cornball.

One of my least favorite seasonal sets is by one of my most favorite singers, June Christy. The main problem with it is all the, errr, special material by a certain husband-and-wife songwriting team, who I keep incorrectly thinking is the same couple who made the Lee Marvin anti-kommie klassic, "Shack Out on Highway 101." But that's another pair.

How Junie manages to keep a straight face whilst intoning the lyric likes of "it's a terrible disgrace all this trash around the place" is a testament to. . .what? Grace under fire? When jazz singer Pinky Winters recreated half the Christymas album---with Pete Rugolo conducting!---a few years ago in a "live" setting," she privately vouchsafed to me of finding the melodies of the songs to be "needlessly complex." But Ms. Winters soldiered on and managed to make a nice festive holiday hash out of the stale fixins at her disposal.

Last year I compiled a CD titled "The Worstest Christmas Ever" to give out to all the friends that I had left. And that gesture pretty much put the Ki-bosh on all those relationships that I had remaining.

The, ahem, artists include: The Singing Dogs, as well as Cats, Ed "Kookie" Byrnes, "Marlene" (whom I've always assumed was the terrific jazz vocalist Marlene Ver Planck recording under a nom de demi) singing "I Want to Spend Christmas With Elvis," and the centerpiece of the collection, Jimmy Jules and the Nuclear Soul System singing "Xmas Done Got Funky," which I reluctantly sold last year on ebay to a buyer in Italy for $160.00. And this track, recorded on a vanity label in the 1950s by a famed sister duo of the Twenties. Any guesses? A hint: it was incessantly played over the p.a. system during Mistress Lyndie (she's from West Virginia...I'm so ooo prouddd) England's b and d sessions at Abu Ghraib prison.