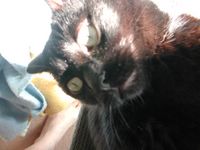 Though I am fully aware that my beloved Kuro has the intellectual capacity of a bag of groceries, sometimes the looks that cross his face seem to indicate otherwise (like here). But I know that's not case. Yesterday, for example, he got a claw attached to a shoe lace which was, in turn, attached to a shoe. He procceded to mentally transmogrify the shoe into a beast that was chasing him, and then began to dash about the house hysterically, as fast as any other known land animal, knocking over lamps and various other objects, dragging the shoe along behind him. Duh!

I finally was able to corner him, calm him down and detach the shoestring (think Androcles and the Lion). Poor baby! So frightened that he was almost unable to enjoy his regular 7:30 pm "fix" of bonito, parcelled out to him by yours truly, Bill, the Enabler.