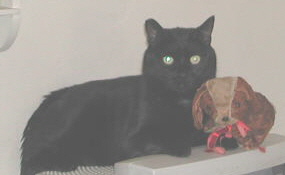 Kuro is David Ehrenstein's (and my) cat, Kuro. (Did you know, btw, that the French have no word for "pet"?) Kuro is seen here in 2005 with Ming Toy, whom David named after. . . "I don't remember. I was three. It was a name I heard somewhere." Fairly precocious for a three-year-old back in 1950, and I am happy to report that David hasn't changed much since then.

David and Ming Toy are now both settling gracefully into. . .un certaine age. They've been through a lot together. Like the time when David, with his parents, visited San Francisco on vacation and he forgot Ming Toy back at the hotel (the Fairmont, of course). The oversight wasn't noticed, however, until they were prrrractically at the Continetal Divide on their auto journey back to Queens, New York. At which point, they had to turn around and drive all the way back to S.F. to retrieve Ming. David learned his lesson and never forgot Ming Toy again; and in the immortal words of Carol Burnett's Mildred Fierce: "Kids! They sure keep ya hoppin'!" So do cats.