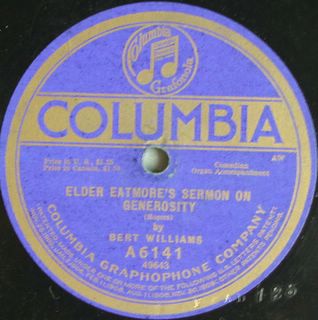 Bert Williams, died on this day in 1922 at age 46. Williams was not just historically the first African-American star, but in his heyday of the century's second decade, an uppermost figure on Broadway who worked with and ranked alongside the likes of Eva Tanguay, Irene Franklin, Bert Leslie, Ed Wynn, Leon Errol. On August 15, 1900, a major race riot erupted in New York City over a black man who had accidentally killed a white attacker of his wife. At the height of the riot the cry went out to "get" Bert Williams, along with a handful of other prominent black performers of the day, including Williams' partner George Walker. Writes James Weldon Johnson in his Black Manhattan, "These seemed to be the only individual names the crowd was familiar with. " Williams survived physically unscathed, but due to the color of his skin the seemingly sure cure of fame had failed to protect him. The incident is said to have haunted him for the remaining twenty-two years of his life. Williams was, in the words of W.C. Fields: "The funniest man I ever saw, and the saddest man I ever knew."