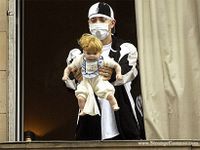 Way back in mid-sixties, there were rumors that the mob shot Michael up with hormones to keep his voice preternaturally high. True
or not. . .it never seemed like a pretty picture behind the scenes.

In the early seventies, I remember watching a low-rent L.A. cable show hosted by singer Chuck Jackson. One episode featured an interview with Michael taped in the back of a moving limo hereabouts in this city where the future comes to die. Chuck musta really pulled strings. Even then, MJ didn't seem to be "all there." The hormones?

Somewhere in the early eighties I watched Michael on an afternoon talk-panel show where the other guest was Fred Astaire. He got all sychophantic with Fred, who was absolutely having none of it. Jackson wanted to know how Astaire danced on the ceiling in Royal Wedding. Fred kind of went sniff sniff and turned his head in the other direction as Jackson fawned on and on, then finally caught Astaire's drift and shut up. Racism? Nahhh! More likely a class thang.

Then there was the time my friend Randal High phoned me around '68 while a Jackson Family special was being televised. He called from North Carolina to NYC, where I was living then, just so he could get me to turn the show on and hit me with a one-liner: "As if any further proof were needed that we really are a nation of pederasts, just take a look at this kid." Ho ho ho hee hee hee ha ha ha. Alas, eventually Michael's shoe apparently (make that allegedly) got shifted to the other foot.

What a ghoulish and sad life. Has anyone ever fallen so vertiginously from such a high plateau of public adoration? It might be lonely at the top but it's crowded at the bottom, as someone (?) remarked somewhere (?) the other day. And even more so in stir. "Do I have to tell you one more time, bitch? Do the moonwalk!"

Even before the trial began yesterday, you just know all manner of contingency plans are being made on the offchance. . .. Just how do you go about deaccessing a menagerie? Ads for "slightly used" giraffes and elephants in the Santa Barbara Penny Saver? And trying to figure out who he'll stay with when and if he ever gets out. Probably not the folks, for obvious reasons. Liz? Well, she's been under the weather lately. Janet? Jermaine? Tito? Dibs are most likely already being taken on who'll get the exclusive post-prison TV interview. Babawawa? Prolly not. . . again, for obvious thanatopsical reasons. Oprah? Maybe. Though, she recently announced plans to quit in ten more years.

Here's what the recently departed Dr. HST has to say on the subject doing the deed with kiddies:

"The difference between an outlaw and a criminal is the difference between a pedophile and a Pederast: The pedophile is a person who thinks about sexual behavior with children, and the Pederast does these things. He lays hands on innocent children---he pentrates them and changes their lives forever. Being the object of a pedophile's warped affections is a Routine feature of growing up in America---and being a victim of a Pederast's crazed "love" is part of dying."

I almost feel sorry for Michael Jackson and his current Lear-like dillema , but obviously. . .not quite.