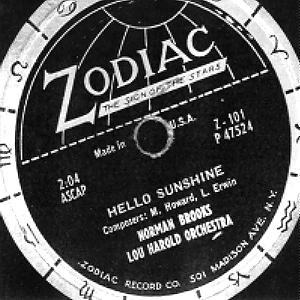 There's no question but that singer Norman Brooks, who just died and was still something of a star north of the border, sounded EXACTLY like AL Jolson. His obit prompted me just now to drag out my old singles of his on the superfine Zodiac ("The Sign of the Stars") label ("501 Madison Ave. NYC"). Here's a coupla couplets from his "3-D Sweetie" (Stillman - Allen).

"Each time she passes, get the special glasses. You gotta pay attention to each heavenly dimension"

As for the "double neg-a-tive" line, I was twelve when I first heard that song; at which time I didn't even know what a SINGLE negative was. What Brooks was actually singing struck me---walking down the street minding my own business one day---like a scrambled epiphany out of the blue after I'd not heard the recording for a couple of decades. Strange how potent cheap music can be!

Little known fun fact: Brooks was original choice for the role that Johnnie Ray eventually played in No Biz Like Show Biz.