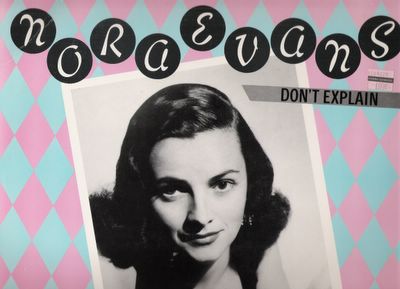 Last night, I wrote, in answer to long-running curiosity on a net group I belong to devoted to jazzier practitioners of the Great American Songbook:

"There really IS a Nora Evans. And NO, she is no relation to Joan Evans [as long-rumored on the list]. I should know. I just got off a 2 1/2 hour phone marathon with her. Could hardly get a word in edgewise. And for me -- vaccinated with a record needle at birth --that's really saying something. I finally met my match. Phone call from outta the blue.

She was a discovery of Elmer Bernstein, it turns out. Started her career as a singer, it seems, doing those 18 Top Hit Hits Hooray by (unidentified) Stars of Stage, Screen and TV, i.e. mimicking Patti Page's Cross Over the Bridge, Mary Ford's I'm a Fool to Care, etc. And as recently as a few years ago did turns at [London's prestigious] Pizza on the Park and Salena Jones' erstwhile night club. As for the couple of albums under discussion here on [this list], Don't Explain, and Right Here and Now, there are a few others besides those. All self-produced on the Noreeva label featuring the impressive instrumental likes of Bob Cooper, Pete Christlieb, Carl Saunders, Chuck Berghoufer, Paul Kreibich, et al.

Of un certain age, she's also been a shrink for 40 years. Quite a character in addition to being a commendable singer. I'm worn out now and gotta go to bed. She might be a psychoanalyst (wonder if she knows therapist/former singer Beverly Kelly?), but I'm the one who listened tonight. A kook in the best sense of the word. I like her!

This morning I Googled several of the episodes that Nora Evans told me about last night regarding her long and checkered career in show biz and they all checked out. Yes! She did appear on a 1957 episode of TV's Stars of Jazz. And, Yes! she did peform at singer Salena Jones' now shuttered London nightclub a few years back. She IS a member of Society of Singers.

In addition, I assume that some other credits I found Googling apparently belong to "our" new Nora. Including the movie Tender is the Night as "singer" and as "musician" in an episode of the fifties TV series, "Johnny Stacato," scored by her "discover" Elmer Bernstein. Also, as she informed me, did tracks for the early 50s budget label, Broadway, covering hits of the day, i.e. If I Give My Heart to You & Smile. I found these on Google. These are probably dozens more where those came from.

As for her claim that she was nearly chosen to replace Champagne Lady Alice Lon (or as the great Stan Freberg would have it, "Alice Lean") after Lawrence Welk fired her back in the fifties because of a cheesecake photo---I'm sure you all recall that unfortunate incident---THAT, I was unable to substantiate.

As late as 1999 she was still capable of putting out some pretty nice recordings on her own Noreeva label, including a terrific "One of Those Songs." "One take, improvised by musicians (Jack Nimitz, Carl Saunders, Buddy Childers, et al) without rehearsal," she told me.

Evans just sings the songs and goes home. In general, though, the Jack Quigley arrangements on her several LPs and CDs are---despite their intelligence---a bit over the top, for purposes of singing, for my tastes.

All of the above, mind you, is in additiion to two marriages, a couple of kids, and several business ventures, including Mexican real estate.

To paraphrase the great Bugs Bunny in Water, Water Every Hare (1952): "Singers lead such interestin' lives."
Posted by Bill Reed at 9:51 AM