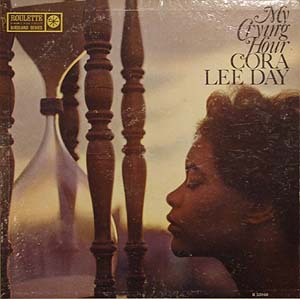 On December 10 in Japan I will be giving a talk before the Tokyo Vocal Jazz Appreciation Society on the subject of singers who recorded only one album---never to do so again---in the '50s and early '60s. And while most of the artists in question were simply swept out of the business by the tsunami of rock and roll, in the case of Cora Lee Day, the circumstances surrounding her singing demise were a bit anomalous. To wit:

"In 1960 actress Cora Lee Day was at a party in New York City when someone asked her to do her imitation of Billie Holiday. She did, and by chance Roulette Records owner Morris Levy was there, liked what he heard---he believed this to be her natural singing voice---and signed her to a record contract. Cora had no choice, then, but to keep singing in this disingenuous style. Roulette spent a great deal of money on a night club act and an LP for her. The recording, entitled "My Crying Hour," contained some of the best jazz players around, such as Jimmy Jones, Harry Edison, Freddie Green and Illinois Jacquet. Ella Fitzgerald and Johnny Hartman were the only other vocalists to release studio recordings with Jacquet’s backing. The album was not a success. And though her live act premiered at the prestigious Mister Kelley’s club in Chicago, it too was a failure. Cora Lee Day never sang in public again. She did, however, become a highly respected actress, eventually starring in the 1991 award-winning film, "Daughters of the Dust." She died in 2000 at the age of 78."