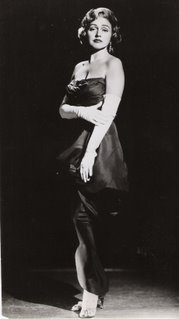 To paraphrase a line in Robert Altman's "Prarie Home Companion," "The death of an old woman is not a tragedy." Nonetheless it's sad the world will never see the likes of Anita O'Day pass its way again. In my opinion, she is the only one of the inarguable greats---Sass, Ella, Frank, Billie, et al---unreduceable, ultimately, to the sum of her parts. With a couple of exceptions, all of O'Day's 17 Norgran-Verve LPS are markedly different in conception from one another. And Anita's singing on each finds her immediately responding to the musical surroundings in a radically different fashion from her other albums. She really didn't scat often, nor play with the melodies all that much. Instead, she was "in the moment," plugged into what the band was doing, and, seemingly, the music of the spheres.

My late friend George Eells helped Anita write her memoirs, and while they might have had a few conflicts in the lengthy process, George just loved her. His last interaction with her was years afterward. He had loaned her some money while they were writing the book. Probably a few hundred dollars. And she rang George up out of the blue one day---unbidden---so she could meet him in a bank and pay the money back. Ultimately, as I recall, George was not all that surprised. And probably had even forgotten the debt altogether. That's the way he was.

So sad that she was taken advantage of in her final years by forces who had anything but her best interests at heart. Best, perhaps, to think of her in happier times.

I feel so lucky to have been able to hear her live 3 times. & just the day before she died I saw "Shortbus" which opens with her voice.

Well I was surprized that the jazz press did'nt pay much attention to Anita O'day. No cover stories and Nostagia radio the Tux in the mid west at least, does'nt play any Anita.
I got to know and hear her from 1970-1983. She was warm, funny, very direct, had boundless energy, and was much more at ease with male company , friends. When some famous female writer was in the club Anita would often snap and say I'am not speaking to her.
I sensed she had fear, after all many women were envious, and cruel to her at times.
She did love Judy Garland and sang duets at the Half Note Club in NYC a few months before Judy died. Too bad Judy and Billie did'nt survive as long as Anita.