The Buzz Begins in Japan for Pinky Winters 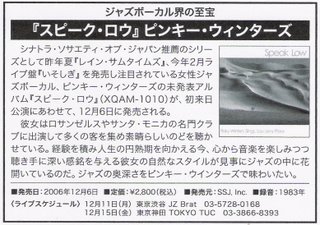 Squib in Nippon Keizai Newspaper (the Japanese Wall Street Journal) on November 29 which translates as:

A Treasure of the Jazz Vocal World

"Pinky Winters has gained a lot of attention since the release of two albums from the Sinatra Society of Japan: Summer 2005‘s “Rain Sometimes” and the “live” album “The Shadow of Your Smile” from February of this year, Now they are releasing the World Premiere of “Speak Low,” on December 6th in time for her first visit to and performances in Japan.

She has been performing wonderfully with her inimitable voice at notable clubs in Los Angeles and Santa Monica, attracting many listeners. After years of experience. she is now approaching the peak of her artistry. Her natural style of singing conveys the sense that she is truly enjoying herself. That, in turn, accords listeners a moving experience. Come and partake of this profound singer and discover how great jazz singing can be." translated by JK

Five gigs---two public and three private---a "live" recording date, a filmed concert, a major newspaper article in the big Daily Mainichi, and a Swing Journal interview. All between December 6th and the 16th. This is going to be so much fun, and finally the recognition that jazz singer Pinky Winters has deserved for so long. When I initially visited Japan seven years ago is the time I first became aware that Pinky is not all that obscure in Japan. The initial tip-off was a small shrine (of sorts) devoted to her in one of Tokyo's gigantic HMV records stores. THAT, and a nosebleed-inducing vertigious price on the collectors' market for her first LP, a ten-incher.

I wouldn't even be surprised to see press and photogs at Narita airport when Pinky touches down. "Miss Winters-zu! Over here!" Probably not, but it's fun to think so.
Posted by Bill Reed at 10:56 AM