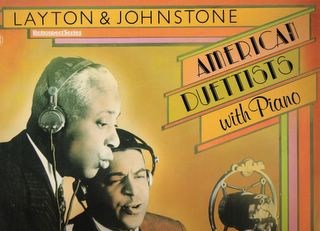 Dear L.: Glad you liked the Hutch track. If you dig him, you will probably also appreciate a British vocal duo of the 1920s and '30s, Layton and Johnstone. Ever heard them? Like Hutch, they were black expats to Britain (in the case of L&J, from the U.S.). The two teamed up in 1922 and probably never dreamed that their partnership would last nearly fifteen years; especially ex-Tammany Hall functionary-turned-chiropodist Johnstone. But when they were given the imprimatur of the Prince of Wales when he saw them in a musical revue, the team took off. They ended up recording over a thousand sides in England. Earned millions. Were reigning stars of the day in that country. Layton, co-author of "After You've Gone," "Way Down Yonder in New Orleans," etc, remained a beloved British entertainer until his death in 1978. Johnstone, on the other hand, was more or less run out of the country in 1936 shortly after it was revealed that he was involved in an affair with the wife of a prominent British violinist. He died in obscurity in 1953 as a bellhop in NYC. Director Robert Townsend told me one time that he was going to make a docu about them for the BBC, but I don't think he ever did.

Curious how L&J manage to clip the "G" from "Misbehaving" exactly half the time in this circa 1930 recording (mp3 link for a limited time only).
Posted by Bill Reed at 7:45 AM