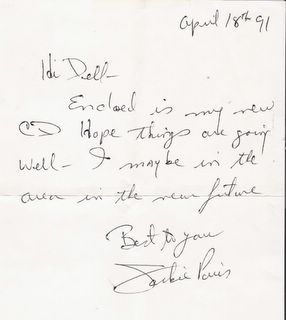 Earlier today, I got an advance look at 'Tis Autumn - The Search for Jackie Paris, the new documentary about the great jazz singer. It was one of the most moving cinematic experiences I've had in quite some time. In anticipation of viewing the film, I first wrote about it here last October.

I was especially touched by footage of the last public performance of Jackie just before he died in 2004. In his late seventies at the time, he was never better. The film also contains a handful of rare archival footage of Jackie in action. . .just about all that there is.

Lest I over-indulge myself in my penchant for Handelian roulades of adjectival overkill, I would just like to say I totally agree with the rave accorded the film in Variety when it premiered at Sundance in Janaury. And let it go at that.

Until recently, it was hard for me to grasp that Jackie Paris was "famous" only with myself and a relative handful of other jazz vocal devotees aroound the world. After viewing 'Tis Autumn, that appears to be the case.

To paraphrase something I wrote here recently about singer Bill Black: on the slim offchance there might something resembling an afterlife, then Jackie Paris, finally getting his propers, must be having a ball right now. Doubtful though.

Prior to official release, 'Tis Autumn will be shown at several other major film festivals.
Posted by Bill Reed at 10:50 PM