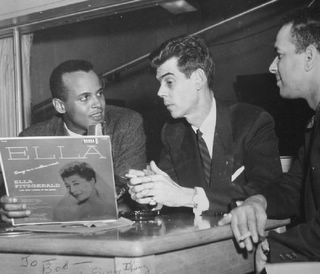 I hail from Charleston, West Virginia, disc jockey Hugh McPherson's onetime base of radio operations. While most of my 1950s peers might have loitered long and hard at the Strand Poolroom in my hometown, my hangout was WCHS, the station on which Hugh broadcast.

A major part of my youth was spent with my buddies in the 'CHS studio watching Hugh, in the vernacular of the times, "spinning platters." He was so good to us teenagers, making us feel very special and grownup. Every few songs, while the vinyl was being "spun"---can one be said to "spin" CDs?--- he would turn to us and perfuctorily utter: "Jazz will never die." I hope he's right.

I recently wrote my friend Jennie Smith, a singing discovery of Hugh's, of my sense that McPherson did interviews with almost every musician of any significance who came through Charleston to play the local Municipal Auditorium throughout the 1950s and '60s. And there were lots. I can still remember his chats with Stan Kenton, Ray Charles, Dizzy Gillespie, Lena Horne, et al., and, most likely, there were even music remotes from the auditorium, which still stands and is as beautiful as I remember it from my mostly---thanks in large part to Hugh---un-misspent youth.

In 1988 the official West Virginia publication, Goldenseal, ran a major career piece on Hugh. It was entitled "The Prince of Highland Swing," which was Hugh's "title" as the leader of a very popular regional swing band of the 1940s. I don't think they ever recorded, but at some point broadcast regularly on CBS on Saturday afternoons from the famous Frank Dailey's Meadowbrook in New Jersey.

Eventually, Hugh became somewhat nationally-known, not because of his jazz-jockeying, but due to his balanced and objective interest in various paranormal phenomena. He even managed to interview most of the major figures in the UFO "field," between jazz tracks on his broadcast. He also garnered a bit of national publicity because of a talking mynah bird, Joe---"I want to go honky-tonk"--- on his show. I seem to recall that they made a guest appearance on NBC's Today.

In my somewhat backwater hometown of Charleston, West Virginia, Hugh McPherson was the personification of a big fish in a small pond. Though he was a "mere" jazz jock, most likely every last one of the town's 78,000 citizens knew who he was. Even diehard country music lovers, who probably constituted the majority of the populace: "Oh, yeah, he’s that fella on the radio that believes in flyin' saucers and has that talkin' bird."

In the Goldenseal article Hugh, who died a few years later, is quoted as saying that he recorded and archived his broadcasts. That's why I was Googling him just now; to ascertain if there might be a central respository of his airchecks and other material. I do that every once in a while. But, alas, still no luck. I just hope who-or-whatever entity that inherited McPherson's stuff is taking good temperature-controlled care of it. That's long been one of my major Baroque worries.
Posted by Bill Reed at 12:15 PM