"Everything But the Oink" [old hillbilly saying] episode 10 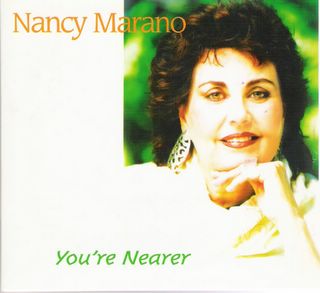 Dear S: A little bit of background on Nancy Marano. Until she and Eddie Monteiro split up professionally about 13 years ago, their accordion-vocal duo was one of the hottest jazz acts in the U.S. and Europe. Their second CD was voted album of the year by at least one major U.S. jazz publication (I forget which) and they were praised extensively by the U.S. jazz critics Whitney Balliett (who profiled them in the New Yorker and compared them favorably to Joe Mooney), Billy Taylor and Terry Teachout, among others. Their third album guest-starred Gerry Mulligan, Roger Kellaway, and Claudio Roditi.

Nancy's father was also a pianist---not a singer, though---and one of Frank Sinatra's first (the first?) accompanists, long before Harry James Years later, Mister Sinatra (as our mutual friend Ruriko always calls him) stopped in his tracks when he heard her singing and piano playing drifting out into the lobby at the Waldorf where she worked, and he lived (when on the east coast). Subsequently, Sinatra, Jilly Rizzo and Steve Lawrence spent a half-dozen hours listening to her singing over a two night period.

Sinatra then said, "I'm gonna do something for ya' kid." But the only thing that he ever DID was to invite her to sing at Jilly Rizzo's funeral. Which she did.

Her brief but intense relationship with Sinatra is hysterically funny, and I will tell you all about it the next time I see you. The first night ends with Sinatra trying to give Nancy his gun for protection on her midnight drive home to New Jersey; a trip she had made hundreds of times from her gig at the Waldorf. "NO! Mister Sinatra! I don't want or need your gun! But, thanks anyway."

This track (mp3 links for a limited time only) is from her newest CD, You're Nearer
__________________
Dear J: You ask me who I would I would like to like to have videos of? I only ask for the moon. I would kill a million times for a clip of Beverly Kenney. She did a Steve Allen Sunday night show. So it must exist. And it is said that she can be seen as one of the atmosphere personages on the Playboy TV series. Not singing, though.

I have tracked down the one known Lee Wiley TV appearance. It's supposedly in the Jack Paar archives. According to Paar's archivist, Jack kept everything that he was interested in or that had special meaning, and told NBC to dump the rest. Let's hope that the Wiley meant something to him. I gave the guy the exact date but couldn't get him to check.

I was working on adapting a Japanese NHK special on Wiley for American TV. Barbara Lea is on it. The penultimate scene and the finale of the special finds a Japanese singer going to the Oklahoma Jazz Hall of Fame and, first, informing them that they have overlooked Lee Wiley, and then flash forward a few months later and she returns for Wiley's installation in the HOF. Nobuko Miyamoto, was an actress---the widow of Juzo Itami, the director of Tampopo---who, upon hearing Wiley sing for the first time, did a complete career turnabout. Japanese are kuru kuru pa (i.e.krazzzeeee!).

And, hey, howzabout any Dick and Kiz Harp footage? Doubtful. (I have a Johnny Hartman clip from a Loonis McGlohan TV special.) Irene Kral! Are there any clips of her? There must be. I saw Kral's next to last "live" (not to put too fine a point on it) performance and she was just wonderful.
Posted by Bill Reed at 7:00 AM

I would LOVE to see the video of Lee Wiley!