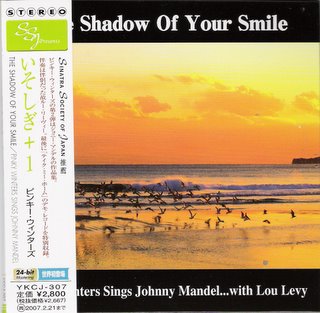 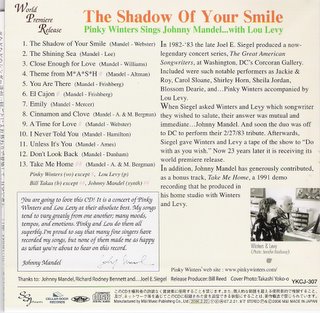 I just received an advance copy of Pinky Winters Sings Johnny Mandel. . .with Lou Levy, the third issue on my new label, Cellar Door Records, released by the Frank Sinatra Society of Japan. The (Tokyo) "street date" is February 22nd. The liner note tells the story of its making:

When Siegel asked Winters and Levy which songwriter they wished to salute, their answer was mutual and immediate. . .Johnny Mandel. And soon the duo was off to DC to perform their 2/27/83 tribute. Afterwards, Siegel gave Winters and Levy a tape of the show to 'Do with as you wish.' Now 23 years later it is receiving its World Premiere release."

In addition, Johnny Mandel has generously contributed, as a bonus track, "Take Me Home," a 1991 demo recording that he produced in his home studio with Winters and Levy."

And there is another contribution from Mandel (reprinted on the back of the album): the addition to the liner note that he sent to Winters after listening to an advance copy of the CD: "You are going to love this CD. It is a concert of Pinky Winters and Lou Levy at their absolute best. My songs tend to vary greatly from one another; many moods, tempos, and emotions. Pinky and Lou do them all superbly. I'm proud to say that many fine singers have recorded my songs, but none of them made me as happy as what you're about to hear on this record."

There are also extensive Japanese notes inside by jazz critic Keizo Takada.

Here is one of the album's 13 tracks: Winters and Levy performing Mandel, and Dave Frishberg's You Are There . (mp3 links are for a limited time only) It's hard to believe that a performance recorded "live" could sound so good. I'm especially proud of this one (more to come this summer)!