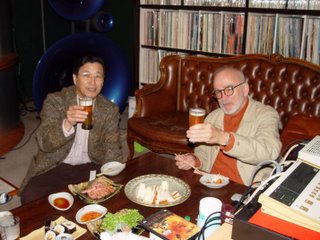 More recycled (everthing but the oink) and blogified emails to friends. . .

Dear Kevin: Thanks for the kind words about Bill Black's Down in the Depths. I sent exactly one promo copy out. . .to New York dj Jonathan Schwartz, and he is playing it all the time on XM satellite radio. On the slim offchance that there is some sort of afterlife---one big, long cocktail party that lasts for two weeks?----Bill must finally be gettings his kicks.

I had the Black acetate restored just for my own sentimental reasons, sent a copy to a friend in Japan as a gift, and the next thing I knew, a label in that country was offering to release it. I've even made a little bit of money off of it!

I am in touch with a musician who played piano on yet another unreleased Black session but I'm having no luck tracking it down. Someone will probably pop out of the woodwork someday with a copy of it. I'm also thinking about releasing a CD of Black's 23 tracks w/ Krupa, but the stuff is mostly garbage, even the cuts with Roy Eldridge. Rancid pop material. Maybe I'll call it "For Completists Only!" ;-)
_________________________
Dear Jeff: I did a chapter on Billy Strayhorn--before the big David Hajdu bio came out--in my book Hot from Harlem. What Hajdu went through to write the Strayhorn book was almost as interesting as the book itself. Can't recall all the details, but to track down one interviewee, he made several hundred phone calls, just going down the Pittsburgh phone book, number by number. When I wrote my Strayhorn chapter, I phoned every person with that surname in the U.S. trying to figure out its derivation. I think that all the answerers were African-American (in some instances I had the brassbound temerity to ask), so I finally came to the possible conclusion that it was a black spelling of a slavemaster's name, probably Strathern or.....Strathairn (hope he wins!). Especically inasmuch as Strayhorn does not much exist outside of the U.S. as a name. I checked many European phone books to verify.
________________________
Dear L: When I was in high school my two favorite singers were Beverly Kenney, and Kiz Harp (see James Gavin p. 322). Both died at age 28 in 1960, BK of suicide, KH of natural causes. Gakkkk! What a teen trauma that was! Now, 46 years later, despite their slim ouevres---8 albums in toto---they remain faves. Am I loyal. . .or wot?
________________________
Dear J: As for Anatomy of a Murder, one of the assistant editors on the film is a friend of mine. I guess you know the bad rep Preminger has. My friend has worked with literally everyone in the biz and dislikes just about all he ever worked with BUT Otto. My editor friend is a bit of ("bit of" hell....IS) a curmudgeon himself, so I guess it was a case of like attracting like.
________________________
Will: Don't know if you saw the rest of Dr. Mikami's site, but he has world class collections of just about everything, Tiffany, cacti, catfish, "antique" hi-fi, etc. I have visited him at his home near Tokyo. He appears to be somewhat wealthy; not from medicine, but investing. Not like any other collector I've ever met. Very self-effacing about his stuff. Seemingly quite mellow. All five of his children are also medical doctors. He has a staff working for him, and in their spare time they attend to his web site. I got to know him because my friend Pinky Winters is his favorite singer. That's me (above right) with him just prior to sitting down to listen to Pinky, and Richard Rodney Bennett's Rain Sometimes on the good Doctor's skeenteenzillion yen stereo rig.
Posted by Bill Reed at 9:40 PM

Video slots on the web has a fan club of there own, people just can’t get enough. Even when news slots are launched by the different software developers they get a standing ovation and are attacked with an intensity of a wolf mother protecting her cubs. It is like the New Years sale in Bond street where the entire population of crazy housewife’s fight over every garment and will draw blood if need be.

Lucky us the since the slots are online there is no such thing as a queue and you can play when you want. You don’t even have to get dressed.

Not that this has any relevance to who plays slots and who don’t. There is clearly according to the latest polls more women playing slots then men. Men seem to drift towards the poker and table games. But here is something us men have to watch out for, they are coming. And they are also coming in swarms.

And since we men can not do more then one thing at a time (at least that is what the women say) we are in trouble. Take Blackjack, they should be better at handling two and three hands then us. Texas Hold’em is up for grabs because of the pace and many factors in the game. So when you are playing against a women you might want to hold on to your chips (and maybe your hart as well) she could end up owning both of them. Women know we are simple beings, and do have this factor over us when playing face to face. All men are suckers to a nice smile, so in all fairness any poker game that has both men and women in it should be played online.

At least you will not be distracted by that nice perfume drifting in from the women next to you. It is so faint but a man has certain instincts and will try to get a good sniff. So leaning in (ever so careful) I still get booted from a game for trying to look at other peoples cards. And I had a straight lined up. Even the big smile I got from the women next to me did not really soften the blow of getting booted. At least the dealer understood me and just told me to take a break for a while. That is my 2 cents worth on the topic of women and gambling.

Signing off for now and heading towards the slots, someone told me there is a good chance of meeting women there. At least that is what they tell me on http://www.streetslots.com