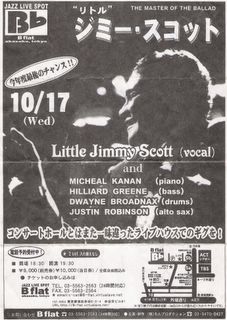 More recycled (everything but the oink) and blogified emails to friends:

Dear L: To elaborate on my post about Little Jimmy Scott. I have almost never been wrong about anyone when it comes to music, i.e. especially my early championing of Jimmy. That is the most obvious example. Really. . .those Atlantic and Tangerine albums of his are sooo gorgeous.

The Atlantic LJS, The Scource, I bought in (the real) Sam Goody's bargain bin for 99 cents the day before David E. and I moved from New York to California in 1974 (I wish we'd never left). I had never heard of him before and just snapped it up on a whim. I played it while we were packing, and when I got to L.A. I set out immediately trying to find Jimmy.

Eventually, I did catch up with him. Remember, I told you about my quote in David Ritz's biography about Jimmy, Faith in Time---the one recorded without my knowledge (shades of George Bush). It concerned Scott's opening at the Hollywood Roosevelt Cinegrill in 1991. Here it is:

"Writer Bill Reed was there:

'It was an auspicious moment, a glamorous affair. I had discovered The Source a few years earlier. I remember asking Gerald Wilson, one of the arrangers of the Tangerine album, whatever happened to Jimmy. 'He's dead,' Wilson said. So when I learned he was alive and well, I was thrilled. We became fast phone friends. I'd never met an artist so friendly and open. On opening night, all the stars came out. Bonnie Rait was there, and so was Paul Gayten, Jimmy's musical partner from the early fifties. There was widespread media coverage, big crowds and enthusiastic response. Jimmy looked resplendent in his tux. It was a happy occasion but also sad. For all the hoopla, Jimmy was so broke that he didn't have money for food. I had to give him and Earlene fifty bucks to buy dinner. I also helped him set up a stand in the hotel lobby to sell his CDs and tapes."

The only thing wrong about the quote was that it was fifty dollars just to buy food in general, not a specific meal. Jimmy and his then-wife Earlene were definitely not into what would now qualify as a hundred dollar dinner-for-two.

My memoir, Early Plastic
Posted by Bill Reed at 7:14 AM

WOW! Bill! Just found your site and am so sorry I missed out on your Jimmy Scott offerings! PLEASE REPOST! Thank you so much! SteveR, Phila