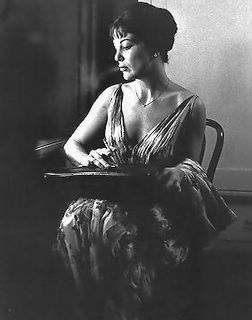 For years I searched to replace a pre-xerox photostat (ask your parents) of Annie Ross (see above) that I copied from either a Metronome or a Down Beat mag circa 1960. I then carried it around with me throughout my Sixties hippie (to put it mildly) perigrinations, but finally lost it somewhere along the way. . .On the Road.

Later, I would semi-regularly leaf thorough old copies of those two jazz publications at used mag stores (again I date myself) on Hollywood Blvd trying to find a replacement. But to no avail.

Then about five years ago--now a somewhat settled down good burgher---I was in a meeting with jazz photographer Ted Williams and going through his presentation book when---boinngggg---there it was. The ellusive Annie Ross photo. I tell you. . .it was downright Twilight Zone-y. TED had taken the photo. Along with skeenteen hundreds of others of Annie, along with Lambert and Hendricks, as well! One of which ended up on the cover of Down Beat, you know. . .the one where she's banging the boys' heads together a la the Three Stooges.

I told Ted the story of my obsession with the Annie portrait , and now a copy of it---signed by him, yet!--- hangs in my entrance hallway. Even nicer, Ted and I have become pals. A very fine man and a great artist. Is there a moral to this story? In the immortal words of Alistair Cooke, "I think not."