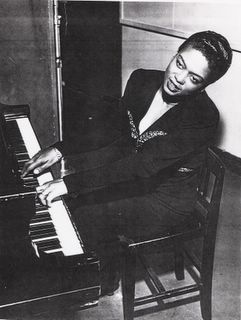 The attached profile of Hazel Scott originally appeared in my now out-of-print collection "Hot From Harlem: Profiles in African-American Entertainment" (1998). Then in 2003 just as I was bemoaning the fact that HFH was no longer available, blogist extraordinaire Jan Herman rang me up out of the blue and asked if I would like to have the Scott chapter reprinted as part of MSNBC.com's (Jan was working for them at the time) salute to Black History Month. Indeed I would, I told him. With the internet reprint, in a somewhat shortened version, came a check for 500 samoleons, more than I had made in total on Hot from Harlem during it's long, painful and checkered history. Truth to tell, I would've given the piece to MSNBC for nothing. But the profile only remained on the site for a short while before disappearing into cyberspace landfill. But here it is, back again in honor of Black History Month (Morgan Freeman's sentiments on the subject notwithstanding). And yes, it's hard to believe but sometimes people do get paid for writing on the internet. What a concept! But this time it's for freeeee. Click here to read Hooray for Hazel.
Posted by Bill Reed at 11:05 AM