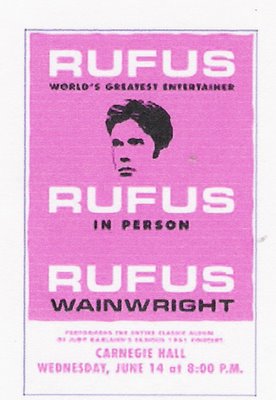 Rumors circulating the past few days that singer Rufus Wainwright will be recreating Judy Garland's legendary 1961 Carnegie Hall concert---the gay Triumph of the Will--- AT the venerable old hall herself are not just some mad queen's hallucination. As Marlene might have put it, "It's twew, it's twew." The exact date is June 14th.

And my EX-CLU-SIVE sources have confirmed to me that not only will Rufus be singing every song that Garland intoned that historic April evening, including "The MAN That Got Away," he will also be performing all the in-between patter as well. It is unclear, however, whether he will just be doing the edited raps on the lp, the one that the Gay Welcome Wagon used to hand out when you debarked the Greyhound bus from the hinterlands at NY's Port Authority for the first time. . .along with a copy of Djuna Barnes' Nightwood. OR the greatly expanded spoken content on the 1989 CD---"I looked like an overweight Balenciaga model. . .", etc. Whichever. . .comparisons with Gus Van Sant's cinematic gloss on Hitchcock's Psycho are inevitable. Let's just hope that Rufus Rufus Rufus fares a bit better critically than that high concept stunt.

And just in case Rufus is reading this and would like to use the services of the historic individual who can clearly be heard shouting out "I love you, Judy," twixt tracks 4 & 5, "Do It Again" and "You Go To My Head," I can put him in touch.

Shortly after Wainright's evening, I will be staging a reading of my own of the equally legendary 1999 Spoken Word Grammy-winning Garland Toilet Tapes---"I'm a lady; I'm a lady who is angry"---at a cave in nearby Santa Barbara, CA. Exact date TBA.

Here is another thoughtfully amusing blog post re: Wainright's Folly.
Posted by Bill Reed at 6:54 PM