A bad case of Starlet Fever 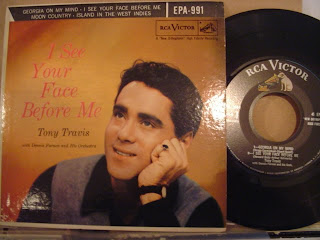 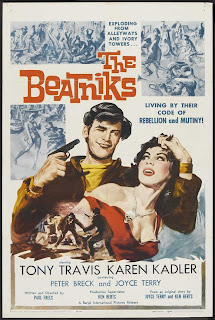 Circa 1950 - ? singer Tony Travis dated Jane Wyman, Judith Exner (!), Mona Freeman, Jackie Gleason's "Girl Friday" Lee Reynolds, Cleo Moore, Elaine Stewart, Shelia Connolly, and Joan Tyler. And that's probably just for starters.
In between, he built a lotta buildings (under the name Travis Kleefeld), played tennis constantly, starred in the 1959 (so bad it's good flick) The Beatniks in which he sang the immortal lines, "sideburns don't need your sympathy," and recorded two excellent abums, this one for RCA, the other for Verve. Leading one to wonder, Didn't he never sleep? Alive and well and living in Rancho Mirage CA, and according to one web site, "He's 82 yrs old and dating his neighbor."

Download available for the next 48 hours only.
Posted by Bill Reed at 7:12 AM

Again, amazing. You've only posted one LP I had actually heard before (the Shirley Horn one).