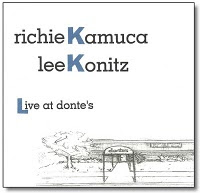 Now available at ebay  AND CD Baby. Read more about it here.

I just now posted the following to the Yahoo group, Jazz West Coast. It might also be of interest to readers of this blog:

I am pleased to report that my new---and previously un-issued---Cellar Door Records CD release, Richie Kamuca and Lee Konitz 'Live' at Donte's is now available for on-line purchase at: http://cdbaby.com/cd/kamucakonitz.

The raw material for this release was given to me by Richie's widow Dory. I sent Konitz an advance copy and he seemed quite pleased with what he heard. Understandably, given the numbers of dates he's played over the years, he could not recall the other musicians on this more than 35-year-old date.

The person who cracked the riddle for me was singer Pinky Winters who, when I gave her the advance CD for help in identification of the other players besides Lee and Richie, immediately said, right off the bat even before she'd heard the first number: "That's Jake Hanna's laugh." Amazing!

I immediately rang up the (alas, now, late) drummer, just back from a tour in Italy with singer Roberta Gambarini. Immediately and somewhat miraculously he COULD recall the other players, i.e. himself, Dolo Coker and Leroy Vinnegar. I have since learned that Hanna's laugh was as famously identifiable as his playing.

I might add that, before Ms. Winters came to my rescue I had just about given up on cracking the riddle of the other musicians on this gig. To begin with, I could find no listings or reviews of the date. I did, however, did eventually manage to uncover someone who was actually there for the occasion. But even though said attendee could even recall parts of conversations that went down that night with friends, he too drew a blank re: the other players. (Gakkkk!) Thanks again, Pinky.

For those, (I'm guessing) relative few of you unfamiliar with CD Baby, it is a cyber seller that has proven a boon to independent CD outfits. I like to think of it as kind of the CD equivalent to the terrific regional food retailer, Trader Joe's. Fast, efficient and easy to deal with. If you've never done business with CD Baby before, I'd suggest that there is no better time to give them a shot. Admittedly I'm biased, but I think that this is a really wonderful CD. A summit meeting of two giants of jazz sax, and a near-first for them. Prior to this, they had only performed and recorded together in ensemble big band sessions, and on one track on a Lee Konitz LP. Well worth the wait! 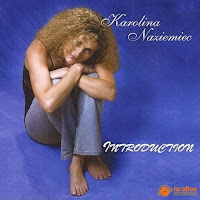