Two wrongs don't make a right, but in this case. . .maybe they do. 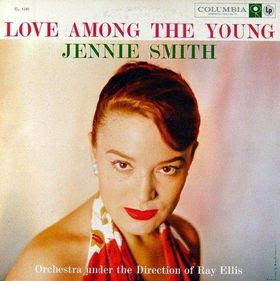 1 Love Among the Young
2 Impossible
3 A Very Special Love
4 While We're Young
5 Young and Foolish
6 Take Me in Your Arms
7 Cross Your Heart
8 A Fine Romance
9 Teacher, Teacher
10 S' Wonderful
11 There Will Never Be Another You
12 All I Do Is Dream of You
Most readers of this blog are probably aware of the fact that I do not upload any music that is in print, or, in 99 % of the cases, ever likely to be commerically available again.  However, in this instance, I'll make an exception with this recording which was recently re-released in a country other than the U.S.

In and of itself, the recording Love Among the Young, IS in public domain in the nation where it has just become commercially available once more. However, the question arises as to whether the operation that re-issued the work doesn't have a moral if not, in fact, legal obligation to recognize the U.S. right to likeness copyright laws? That is to say, even though this recording is no longer under copyright to Columbia Records in the country in question, the artist who created the recording, Jennie Smith, is still alive and would seem to have a right to derive compensation---which she hasn't thus far--- based upon public familiarity with her name, likeness and persona, etc. Especially because the country in question is, along with the U.S., a signatory to the Berne Convention , which deals with issues of international copyright protection. And, NO!, this won't be on the final. And, NO!, I'm not jockeying for that gig on the Supreme Court.

Then there's the school of thought that adheres to the theory that, "Well, at least someone made it available again, something that, clearly, Columbia Records will never do."  Paging the RIAA rabbi!

Download available for the next 48 hours only. A won-der-ful recording!

Yours truly,
Conflicted
Posted by Bill Reed at 6:39 AM