A surfeit of superlatives

By now it should be apparent that singer Jane Harvey's new, radically revamped version of her 1988 Stephen Sondheim tribute album has become something of a "cause" for me. And not just because I work for the record label in Japan that has re-issued it.

The current incarnation of the recording has received just about the best set of reviews of recent memory. And make that "extra-categorically." For if this were a Broadway musical they're writing about, it'd run as long as South Pacific. Feast your eyes on the passel of write-ups assembled on Harvey's page at CD Baby. If you remain unconvinced, then take a look at this rave just in from Joe Lang writing in the April issue of Jersey Jazz. But if still aren't convinced, I'd suggest you take a listen to Jane's searing, soaring version of SS's "Old Friends" from the CD. Case closed!

"Back in 1986, I caught singer JANE HARVEY perform a program of song by Stephen Sondheim at Freddy’s in New York City. It was a good show, and I was excited to learn that Atlantic Records was going to release an album of Harvey singing Sondheim. She had worked with the trio of Mike Renzi on piano, Jay Leonhart on bass and Grady Tate on drums, and that is the way that the album was recorded. The powers that be at Atlantic decided that they would overdub the string heavy Ray Ellis Orchestra on the basic tracks. When the album came out, it seemed to lack the excitement that marked the live performance. That is a wordy way to say that the new release of Jane Harvey Sings Sondheim (Sinatra Society of Japan – 1039) is a long overdue happening for this new CD contains, with one exception, only Harvey and the trio, no overdubbing, plus a newly recorded take on “Send in the Clowns.” Sondheim’s music has been largely ignored by jazz performers. The common view seems to be that his material does not work well outside of his shows. Of course, cabaret performers have successfully been doing many Sondheim selections regularly through the years. Harvey, who has her roots in jazz, shows on this album that there are many wonderful Sondheim songs for a jazz oriented singer to explore. There is humor, irony, passion and a whole range of other emotional and psychological states of mind to be found in his rich and tuneful catalog. Harvey takes some unusual paths through many of the songs, but this makes for an interesting and challenging listening adventure." 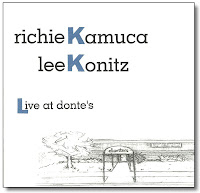 Now available at CDBaby.com
Posted by Bill Reed at 9:51 PM