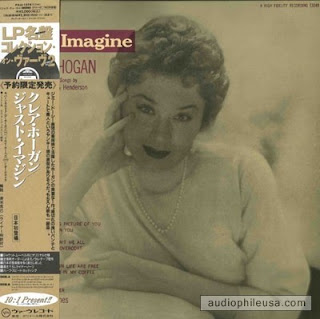 1. If I Had a Talking Picture of You
2. It All Depends on You
3. Lucky in Love
4. Aren't We All
5. Button Up Your Overcoat
6. I'll Know Him
7. Together
8. The Best Things in Life Are Free
9. You're the Cream in My Coffee
10. Just Imagine
11. My Sin
12. Thank You Father
Claire Hogan, a former big band singer, eventually became the secretary for legendary composer, Cy Coleman.It was while she was working in this capacity that he oversaw the production of a pair of Hogan recordings for the MGM label. This is the first of the two, with Leroy Holmes orch., released in 1956. The second, Boozers and Losers, came more than a decade later, in 1967.  Rather far apart, I would say. Guess she was otherwise detained answering the phone, and taking dictation for Coleman. Of the two, I prefer the '67 effort. But that one is rather easy to come by on the rare record market, while this one eluded my capture for a number of years until last November when I was record shopping in Tokyo and I came across this perect facsimile edition of the LP. Perfect because the copy is absolutely accuarate in every reproductive detail, down to even the same rather heavy cardboard stock that MGM employed for its jackets. A-ma-zing!
Available for downloading for the next 48 hours only.
Posted by Bill Reed at 6:58 AM

Bill, A wonderful collection of 20s songs. Ms. Hogan does justice to "If I Had a Talking Picture of You" and "I'm a Dreamer (Aren't We All?)"--although Sylvia Syms tops her in her Torch Singer album for Columbia. Thanks for this find. Can't you see it in your heart to post "Boozers and Losers"?

Thou art rich in sacred things! If only I hadn't missed "the Group."

Ooh this one was really new to me! With which bands did she sang? Is her second lp also wit a large band? Would be cool if she was accompanied wit Mr. Coleman himself...
Her style and sound recalls some of the quality's of Joanie Sommers and Jaye P. Morgan.
Love the uptempo numbers!
Thank's!

One of the bands Hogan rec. with was Johnny Bothwell's. Yeah, sure, I'll get around to Boozes and Losers one of these here days.