Surfing around on the net you'll only find a handful of "hits" with any editorial content for my favorite Japanese pop music star, Tatsuro Yamashita, on U.S. Google, whilst Japanese Google yields many many times that number. This blog entry might be the only non-commercial post in English about him that is readily available on the net.

Yamashita has remained at the top of the pop-rock heap for nearly three decades in his native land. And it seems as if exactly every seven years sees a release of new material. The new one, due 9/14/05 is entitled Sonorite. Here's the track listing fresh from his official Japanese site:

* previously issued (perhaps one or two other tiles have also been previously released?)

FYI: Last Saturday (8/27) in the financial newspaper Nikkei (Nippon Keizai Shinbun) there was a fairly extensive interview with Yamashita, the two main points of which were:

a.) His observation that he is now 52-years-old, the same age that two legendary Japanese musicians Misora Hibari and Ishihara Yujiro were when they died. Therefore, he, Yamashita, is going to redouble his efforts to complete his many musical projects that are not yet fulfilled, and on his own terms.

b.) How much the necessity of having to switch from older technologies (digital tape, etc.) to newer (recording to hard drive, etc.) have caused him to rethink and rework the way he operates in the recording studio.

Kuro and Montebello the Monkey 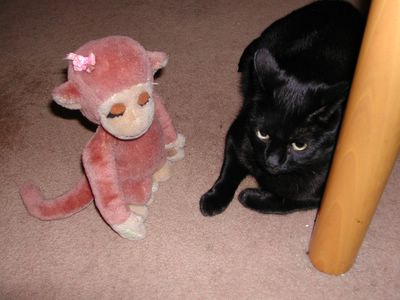 1. Duke Ellington was the first metrosexual.

2. If wishes were horses then pigs could fly.

3. "And for your next number, Herr Wittgenstein?"

"The difference between Iraq and Vietnam: At least George Bush had an exit strategy for Vietnam." --- Randi Rhodes
Posted by Bill Reed at 9:43 PM No comments:

Very sad to read the New York Times (phenominally lengthy) obit for the Reverand Al Carmines in yesterday's edition. Here's an appreciation I wrote about him a couple of years ago on another web page.

AL CARMINES Playing the original cast recording of composer Al Carmines' 1967 Gertrude Stein musical, "In Circles," recently brought back all those extraordinary musicals and oratorios I saw in the 1960s at Greenwich Village's Judson Memorial Church. "Peace," "Faggot," "Wanted," "A Look at the Fifties," "About Time," etc. Among the greatest live productions I have ever witnessed, yet nearly all done on a budget of, to invoke the memory of Norma Desmond, spit and chewing gum. Several of them went on to have an Off-Broadway life of their own. Carmines wrote the music for at least two bigger budgeted productions that I know of: "Promenade," which opened uptown in New York, and another, a W.C. Fields musical starring Mickey Rooney, which went tilt out of town. My god, that stuff was great. I especially loved Carmines and Roslyn Drexler's "Home Movies" and went to see it over and over and over again. It even had a brief run Off-Bway. I never understood why "Home Movies" didn't become a classic of the American Musical Theater. Or for that matter any one of a half-dozen other Carmines/Judson shows. I wonder if there's a bootleg recordings of "Home Movies?" It doesn't really matter, though. I can still hear all the songs word for word in my head: "I Know You Sell It But Do You Eat It," "The Peanut Butter Song," etc. And who can ever forget the wonderful Drexler epigram spoken by one of the characters?: "Her fine points are as unrealized as tadpoles." I just looked Carmines up on the net and he is still with us as the associate pastor of NY's Trinity Presbyterian Church. . .instead of becoming the great white hope of the American Musical Theater as was predicted for him by some. If someone today wanted to mount a revival of "Home Movies," and did a good job of it, I'd wager they'd make a fortune. So would I, not investing in it, but making a killing on my bet.
Posted by Bill Reed at 9:30 PM 1 comment:

Lucky Thompson, a legendary tenor and soprano saxophonist who took his place among the elite improvisers of jazz from the 1940s to the 1960s and then quit music, roamed the country and ended up homeless or hospitalized for more than a decade, died a week ago in Seattle. He was 81.

His death was confirmed by his son, Daryl Thompson. Thompson was living in an assisted-care facility at the Washington Center for Comprehensive Rehabilitation in Seattle.
Thompson connected the swing era to the more cerebral and complex bebop style. His sophisticated, harmonically abstract approach to the tenor saxophone built off that of Don Byas and Coleman Hawkins; he played with beboppers, but resisted Charlie Parker's pervasive influence. He also played the soprano saxophone authoritatively.
"Lucky had that same thing that Paul Gonsalves had, that melodic smoothness," one of his contemporaries, the saxophonist Johnny Griffin, said in an interview. "He wasn't rough like Ben Webster, and he didn't play in the Lester Young style. He was a beautiful balladeer. But he played with all the modernists."

Thompson was born Eli Thompson in Columbia, S.C., on June 16, 1924, and moved to Detroit with his family as a child. After graduating from high school in 1942, he played with Erskine Hawkins' band, then called the 'Bama State Collegians; the next year he moved to New York as a member of Lionel Hampton's big band.

After six months with Hampton, while still very young, he swiftly ascended the ranks of hip. He played in Billy Eckstine's short-lived big band, one of the first to play bebop, which also included Charlie Parker and Dizzy Gillespie. He joined the Count Basie Orchestra in 1944.
In 1945 he left Basie in Los Angeles. When the Charlie Parker-Dizzy Gillespie sextet came through L.A., Thompson was hired by Gillespie as a temporary replacement for Parker.
Fiercely intelligent, Thompson was outspoken in his feelings about what he considered the unfair control of the jazz business by record companies, music publishers and booking agents. Partly for these reasons, he left the United States to live in Paris from 1957 to 1962, making a number of recordings with groups including the pianist Martial Solal. After returning to New York for a few years, he lived in Lausanne, Switzerland, from late 1968 to 1970. He came back to New York again, taught at Dartmouth in 1973 and 1974, then disappeared from the Northeast, and soon from music entirely.

Friends say he lived for a time on Manitoulin Island in Ontario and in Georgia before eventually moving west. By the early 1990s he was in Seattle, mostly living in the woods or in shelter offered by friends. He did not own a saxophone. He walked long distances, and was reported to have been in excellent, muscular shape.

He was hospitalized several times in 1994, and finally entered the Washington Center for Comprehensive Rehabilitation.

His skepticism about the jazz business may have kept him from a career recording as a bandleader -- "Tricotism," from 1956, and "Lucky Strikes," from 1964, are among the few albums he made under his own name -- but he left behind a pile of imposing performances as a sideman. Among them are recordings with Dinah Washington in 1945, Thelonious Monk in 1952, Miles Davis in 1954 (the "Walkin'" session, a watershed in Davis' career), and Oscar Pettiford and Stan Kenton in 1956. His final recordings were made in 1973.

In addition to his son, Daryl, of Stone Mountain, Ga., Thompson is survived by a daughter, Jade Thompson-Fredericks of New Jersey; and two grandchildren.

Part of Thompson's legend came from the fact that he was rarely seen in public; at times it was hard for his old friends to find him. But the drummer Kenny Washington remembered Thompson's showing up when Washington was performing with Johnny Griffin's group at Jazz Alley in Seattle in 1993. Thompson listened, conversed with the musicians, and then departed on foot for the place where he was staying -- in a wooded spot in the Beacon Hill neighborhood, more than three miles away.

Yesterday my friend, jazz singer Melodye DeWine, rang me up to ask my thoughts about some ad copy that had been written for her new CD Nocturnal Velvet. She read the advert, and there was usage of the word "future" to which I took exception.

"Darling," I said, "the future is a thing of the past. Just like 'talent,' which, according to the immortal and (newly) late, great Hildegarde, is also a thing of the past." But you'd never know it from listening to Melodye's debut CD which finds her in the company of some of Hollywood's top musicians, including Llew Matthews, John B. Williams, Luther Hughes, Ralph Penland, Jeff Clayton, and national bop treasure Jack Sheldon, who is heard to excellent effect on several tracks on the CD, including "Baby It's Cold Outside" .

There more info about the album, due out shortly, at Melodye's website .

My web site
Posted by Bill Reed at 4:52 PM No comments:

Separated at birth?
Posted by Bill Reed at 8:42 AM No comments:

Mariko Takahashi is a great, long-running music star in Japan. In her mid-fifties now, but really keeps up, as evidenced by "Koi Kotoba" a 1999 hit for her, arranged by the terrific Tomoji Sogawa. Just listen to all those synth squawks and burps way down (and sometimes not so way down) in the mix. And dig that crazy vocoder! The lyrics (Takahasi wrote the song) have something to do with Love (Koi) of Language (Kotoba)

My web site
Posted by Bill Reed at 2:19 PM No comments:

FROM YAHOO NEWS YESTERDAY RE: THE AIR FRANCE CRASH IN TORONTO:

"Hours after the crash and rescues, at least one passenger was less than complimentary about the work of some of the flight attendants during the accident.

Gwen Dunlop, a Toronto resident who was on the flight returning from vacation in France, said when the plane first touched down the passengers believed they had landed safely and clapped with relief.

'Only seconds later, it started really moving and obviously it wasn’t OK,' said Dunlop. 'At some point the wing was off. The oxygen masks never came down; the plane was filling up with smoke.'

'One of the hostesses said, ‘You can calm down, it’s OK,’ and yet the plane was on fire and smoke was pouring in,' Dunlop told The AP. "

“I don’t like to criticize, but the staff did not seem helpful or prepared.”

AND YET, THE FLIGHT CREW STILL MANAGED TO GET ALL 300 OFF THE PLANE IN AN UNBELIEVABLE NINETY SECONDS FLAT! JUST THINK HOW QUICKLY ALL WOULD HAVE GOTTEN OFF HAD THE CREW NOT BEEN SO UN"HELPFUL" AND UN"PREPARED."

THERE'S JUST NO PLEASIN' SOME FOLKS. (AND I'M NOT ENTIRELY CONVINCED THAT DUNLOP DOESN'T "LIKE TO CRITICIZE.")
Posted by Bill Reed at 2:17 PM No comments: