Here's a translation---as promised---of the original French profile of Pinky Winters that appeared herein on September 18.

It wasn't what she'd planned, but fate decided otherwise. And it all came about quite naturally without the addition of “luck,” or the subtraction of God knows what. In short there's no simple way to account for the success of Pinky Winters. A legend among LP record collectors. A jazz singer who only the Japanese appear to wildly venerate. She lives in Los Angeles where you can hear her several times a year singing to an attentive crowd of connoisseurs, many of whom are unfamiliar with the blond sitting behind a giant microphone hung from the ceiling in a photograph on the cover of her first album cut fifty years ago. This same woman, who time has left untarnished, cooks, gardens and vocalizes without calculation or guile -- typical of someone who has nothing to prove anymore. She's an artist of great sensitivity -- but does that say it all? She lives in a quiet neighborhood in North Hollywood with Dinah the cat --- less Shore than Washington. She won't offer her age when one ingenuously ventures to ask, preferring instead to play riddles about her birth year. When 1934 is mentioned she mischievously replies; "Pretty close." In the end she admits that she was twenty or twenty-one in 1954 when that album was released.

Then one day Pinky disappears from the jazz world. A divorce, a child, a need to earn a living, then a second marriage, a second child. . ." I 'm happiest at home," she explains. She turns down a recording date in Chicago and leaves the business. "Wives didn't go on the road,” she says without need of further explanation. ”Chance has nothing to do with it" And then a phone call came! It was 1980. Lanny Morgan of Supersax had an engagement at Donte's. "That's how I met my third husband, Lou Levy." A goldsmith. A pianist with an inquiring mind. Taste to burn. "He meticulously examined original scores to understand the composers' intentions.” The man had worked with Sinatra, Vaughan, Fitzgerald, Peggy Lee, and many other jazz vocalists. Pinky and Lou understood each other instantly. They counted among their friends Henry Mancini, Shirley Horn, Johnny Mandel, who came over to sit round the piano and sing family style. Then in 2001, Lou goes to where no one ever returns and Pinky, her eyes wet with tears, says: "I think of him every day."

Today she really sings. Not that she ever was able to do otherwise. But now she sings for the right reasons. This winter, she's performing in Japan. We don't gaze at old photos. Dinah won't let us. Besides we're looking toward the future. After all, today is the start of a new career. But about the past she's quite willing to say: "When I listened to my first recording, I thought who was this woman?" These days, she pays more attention to the melody and sings the lyrics of standards as if she'd written them herself. At twenty you can't do that. It is necessary to have known the commotion of life, its happiness and its rough edges in order to start. Her discography? Like a game of pick-up-sticks thrown down at random. A second disc in 1959, five years after the first one, followed by a gap of twenty-six years and a sudden return in 1985. It will be another nine years for the next recording to see the light of day. An equal part of the picture, two new recordings, one of which was made a few years ago and another just released but made in 1983. Does it matter? Frankly, the future looks bright. As bandleader Bob Florence, remarked “Her voice is like jumping into a tub of butterscotch. It also helps to have a wonderful imagination, a great ear, and be a little nuts.” 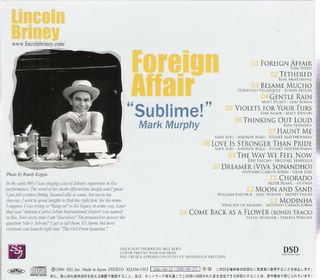 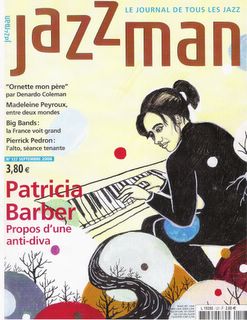 SEPTEMBER 2006 ISSUE
DOUBLE CLICK TO ENLARGE
Posted by Bill Reed at 11:05 AM No comments: 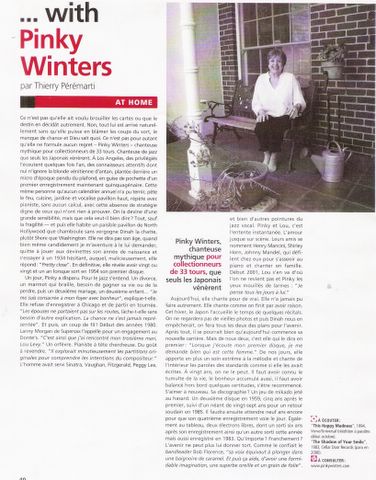 DOUBLE CLICK TO ENLARGE AND READ
ENGLISH TRANSLATION TO FOLLOW WEDNESDAY
Posted by Bill Reed at 11:04 AM No comments:

Words To Live By