In addition to my forthcoming "Hot from Harlem". . .

Within the next few weeks I'll be making available an e-book collection of some of my writings about jazz and jazz-related vocalists. When it is finally on-line, I'll make an announcement here. The book consists of liners notes and various articles that I've written for magazines and newspapers over the years, going all the way back to the oldddd L.A. Herald-Examiner and Rolling Stone. I've titled it A Fine Romance: My Lifelong Affair With Jazz Singing and Singers. Here is the Foreword:

Whole Word Concept: Before “Sesame Street” was even a gleam in Jim Henson’s eye, I learned to read by that, unfashionable for its time, process. Several years before I was of school age, my older sister Nancy began holding up records----78's---and I would learn to identify the title on the label not phonetically, but visually. If I got the correct answer, my reward was to hear the record. I think that's when I began associating music with enjoyment, even beyond the obvious pleasure of the music itself. Just about the most popular recording act of the day was the Andrew Sisters, and those sides were the ones that were most used as my visual aids. I still have sense memory of one of their hits of the moment being held up and my four-year-old-voice parroting "Andrew Sis. . .Sisters . . . Ruh-Ruh-Rum. . .and. . .and Coca Cola." Everyone who had gathered around to watch this juvenile savantry, clapped their hands with glee, patted me on the head, and then spun the disc (still a quite good one, I think). Thus the word “lifelong” contained in this book’s title. For this was where my musical life began.
____________
I once gave a Betty Carter CD to a friend who is much more stylistically conservative than the former, but, nonetheless, still quite a good jazz singer. She had never heard Carter. I couple of days later I called to ask what she thought of it. I hoped she’d enjoyed it; instead, she told me, she'd become so immediately overwrought by the experience that she ejected it from the player in the moving car in which she was traveling and hurled it onto the freeway. (Talk about your hip litter!) Carter herself was once asked to name her "favorite singer." She replied, "No comment." Which I always felt was her amusing and diplomatic way of saying, “Me.”

The foregoing is by way of illustrating that there are perhaps as many definitions as to what constitutes the fine art of jazz singing as there are opinion-holders themselves. To further illumine my point, noted critic Ira Gitler once opined that, “One person’s jazz singer can be another’s Robert Goulet.” Only a little bit more to the point, the New Yorker scribe Whitney Balliett once wrote that “The most popular definition of a jazz singer is that there is no definition. But there is. A jazz singer simply makes whatever he or she sings. . .swing. Ethel Merman is not a jazz singer. Doris Day is.” To belt then, as does Merman, is not necessarily to swing. And, while we’re at it, just exactly what is this mysterious and elusive thing called swing? Andrew, a friend of mine, was a music major at Harvard in the early 1980s. On one occasion, jazz great Benny Carter was a visiting lecturer there, and Andrew assumed that with such an articulate professor as Carter, he might finally be able to get to the bottom of this “swing” business. But when Andrew raised his hand and asked his question, Carter's answer was along the lines of that old, as-of-yore saw: "If you have to ask, then you’ll never know.” Ouch!

On the other hand, the Hi-Lo’s’ Clark Burroughs once told me that he believed that the quality of swing can actually be isolated and quantified. Something to do with how when most folks sing they invariably land squarely on the beat (not to swing), while a few tend to land just a hair in front of, or behind the beat (to swing). Burroughs says this can even be proven scientifically, but that’s an experiment perhaps best left for some other night around the ol’ campfire.

Jazz icon Annie Ross also has a theory: “When you swing, you know what it is to swing. You work with musicians your whole life. Suddenly one night you're working. . . Everything is jelling. You're jelling with the bass player and the drummer and the piano player and you're all on the same plane and you know it's swinging. No one has to define it for you. But above all, you’ve got to know where 1 is. . .1,2,3,4.“

Add to swing, then, the qualities of good intonation, a genial “sound” and recognizable timbre, good taste in repertoire, plus just old fashioned good taste in general, put them all together and, to my way of thinking, you’ve got yourself a jazz singer. This book, based on articles I’ve written over the past thirty years, charts the process by which I’ve arrived at these conclusions.
Posted by Bill Reed at 3:34 PM 2 comments:

Jazz sax star Richie Kamuca began his professional career as something of devotee of Lester Young, but long before the end of his unspeakably short life (he died in 1977 just before his 47th birthday), his playing was thoroughly grounded in bop. To further underscore his leanings in that direction, toward the latter part of his career he often switched over from his main instrument, tenor sax, to alto and led a quintet that clearly was operating as homage à Charlie Parker, with trumpeter Blue Mitchell playing Dizzy to Richie’s Bird. The group could easily have been called Birdmania.
Kamuca was born in Philadelphia in 1930 in Philadelphia, Pennsylvania. After gigging around his home town, he joined the Stan Kenton Orchestra on tenor saxophone in 1952. Two years later he linked up with Woody Herman's band, where he became a part of the Four Brothers unit, eventually settling on the west coast where he played and recorded with, among others, Shorty Rogers, Art Pepper, Chet Baker and Stan Levey. He also recorded his first session, as a leader, for Keynote. He was a member of Shelly Manne and His Men from 1959 through 1962. Shortly after that, he moved to New York, where he worked in a small group with Roy Eldridge. He also became a member of the studio orchestra for the Merv Griffin television show and remained with the band when it relocated to Los Angeles and was still a member of the outfit when he died in '77. In his later years Kamuca recorded three memorable albums for Concord.
At the present time, I am preparing a series of previously-unreleased Kamuca recordings for release in Japan, the first of which will come out toward the end of this year. The first two CDs will find him paired with two players with whom he never previously recorded (except for one lone track).
Posted by Bill Reed at 6:39 AM No comments:

My buddy Roger C. wrote me a couple of days ago to the effect that:

Dear Bill As you know I love finding the overlooked, lesser-known singers. Lynne and I have uncovered a couple that might be of interest. Unfortunately, I cannot find a site where we can take a listen, and so are reluctant to make a purchase. You might be familiar with these singers and willing to pass on some observations. I think that you have a handle on our tastes, Bill: e.g., Pinky, Beverly Kenney, Lynn Taylor, etc. The two are: 1. Frances Lynne, (who worked with Desmond and Brubeck). She apparently didn't record until late in her life, so I am wondering as to the quality of her voice. 2. Carole Creveling - we found an of obscure 1955-56 session with west coast cats for $64 but not willing to pay that much. Thanks for any help Bill, Roger
_____________

I mulled it over, and by crackies he has a point. So here are some extended mp3s (none of that stingy 30 seconds stuff for us) that should give folks a fairly good idea of how each of the singers thus far in SSJ Records' One Shot Wonders series sounds. In the case of all nine of the OSW releases, I did the research on the recordings and penned the liner notes.

For the record: In the case of the Linda Merrill recording, she might have released one additional album in addition to this one. At least, someone by the name of Linda Merrill self-produced an album of Neil Diamond songs on a one-off label. And I later learned that Dick Noel also cut an album of hymns for the Coral label sometime in the 1950s. But then that sorta doesn't really count. . .does it?
_____________

Listen to: Sue Childs / read about

Listen to: Flo Bennett / read about

Listen to: Carole Creveling / read about

Listen to: Flo Handy / read about

Listen to: Frances Lynne / read about

Listen to: Dick Noel / read about

Listen to: Linda Merrill / read about

Listen to: Corky Shayne (not yet restored-- - forthcoming this fall) / read about
Posted by Bill Reed at 3:43 PM 2 comments:

"Oh, Auntie Em! You have to believe me. This really happened."

Last night I dreamed that I was a member of the legendary vocal group the Hi-Lo's and we were in the studio recording an album, "The Hi-Lo's Meet the Four Tops." Inasmuch as the Tops had not had a chance to rehearse with us beforehand, I was meeting the group for the first time. We were just going to jam and take our chances. I shook hands all-around and was especially excited to be meeting their lead singer, Levi Stubbs, for the first time. In the dream, he had a very strong grip.

Most of the resultant CD session was also part of my dream, including the recording of a song I had never heard before entitled "Promises in a Secret Garden." But now, I can't remember how it went. We also sang "Sunrise, Sunset" in the dream.

I can just hear you saying now, "My my my, Dr. Chilledair, what a rich, full fantasy life you must lead!"
Posted by Bill Reed at 8:31 AM 1 comment: 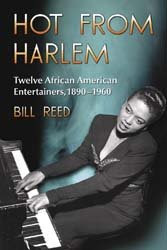 ____________________________
Hot from Harlem: Twelve African American Entertainers, 1890–1960
Bill Reed
ISBN 978-0-7864-4467-0 ca.
20 photos, notes, bibliography, index
softcover 2009
Not Yet Published, Available Fall/Winter 2009
McFarland & Company, Inc.
Description
From the early days of minstrelsy to Black Broadway, this book is the story of African American entertainment as seen through the eyes of its most famous as well as some of its most obscure practitioners. The book forms a chronological arc that moves from the beginning of African American participation in show business up through the present age. Will Marion Cook and Billy McClain are discovered in action at the very dawn of black parity in the entertainment field; six chapters later, the young Sammy Davis Jr. breaks through the invisible ceiling that has kept those before him “in their place.” In between, the likes of Valaida Snow, Nora Holt, Billy Strayhorn, Hazel Scott, Dinah Washington, and others are found making contributions to the fight against racism both in and out of “the business.”
About the Author
Bill Reed is a journalist and writer whose articles on show business, the arts and popular music have appeared in such publications as Rolling Stone, the San Francisco Examiner and International Documentary. He is a record producer of jazz recordings for SSJ Records (Japan).
McFarland's catalogue page
Posted by Bill Reed at 9:05 AM 2 comments: