Welcome to our beautiful home at . . . 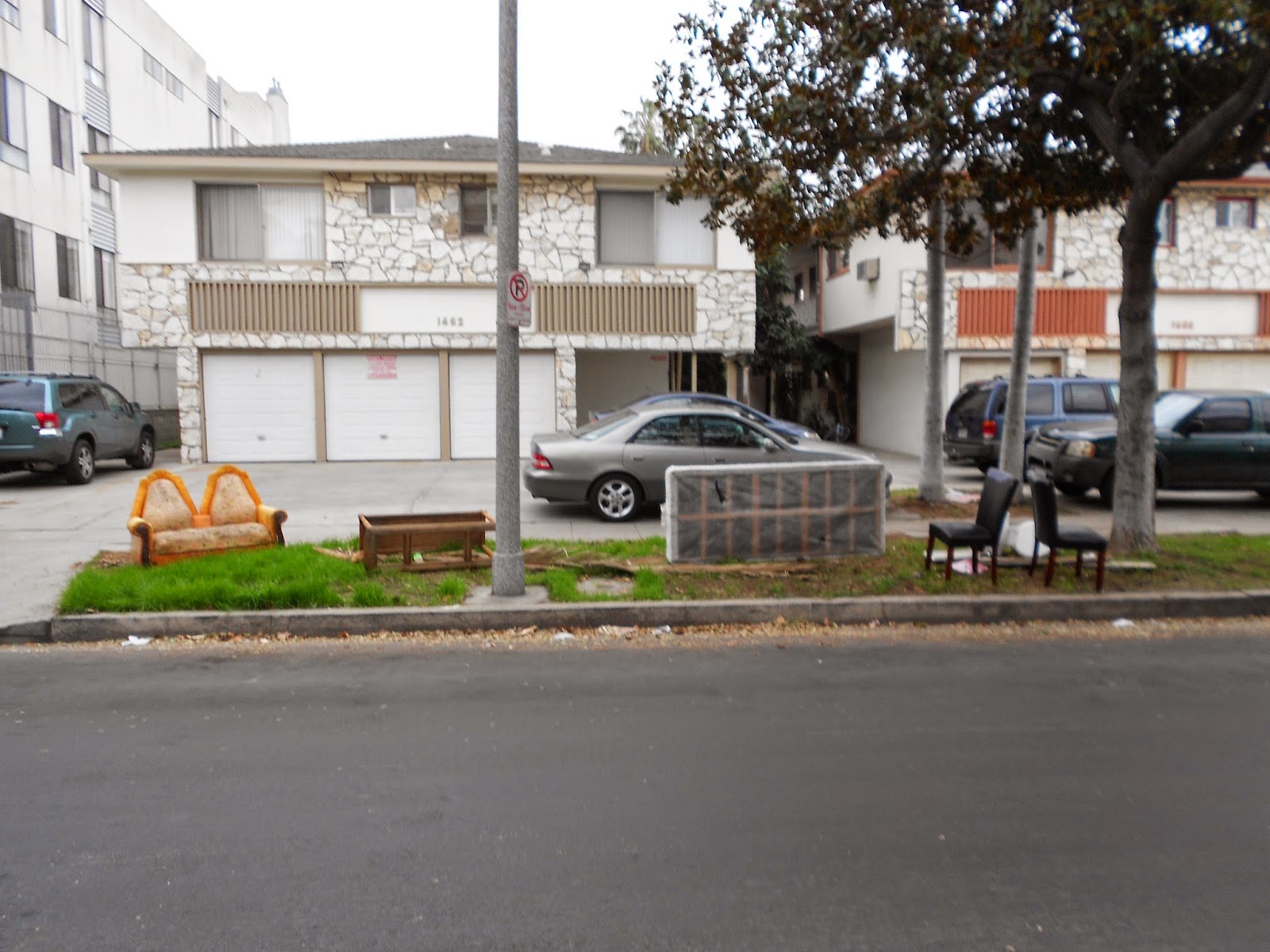 A Kurt Krismas (Reichenbach, that is)

As gawd is my witness: one time in the lobby at the Roosevelt Cinegrill I said to David E., "I feel like I'm in the presence of palpable evil." D. said, "Turn around." I did . . .and THERE he stood surrounded by a bevy of bodyguards. One of only three parapsychological experiences of my life. 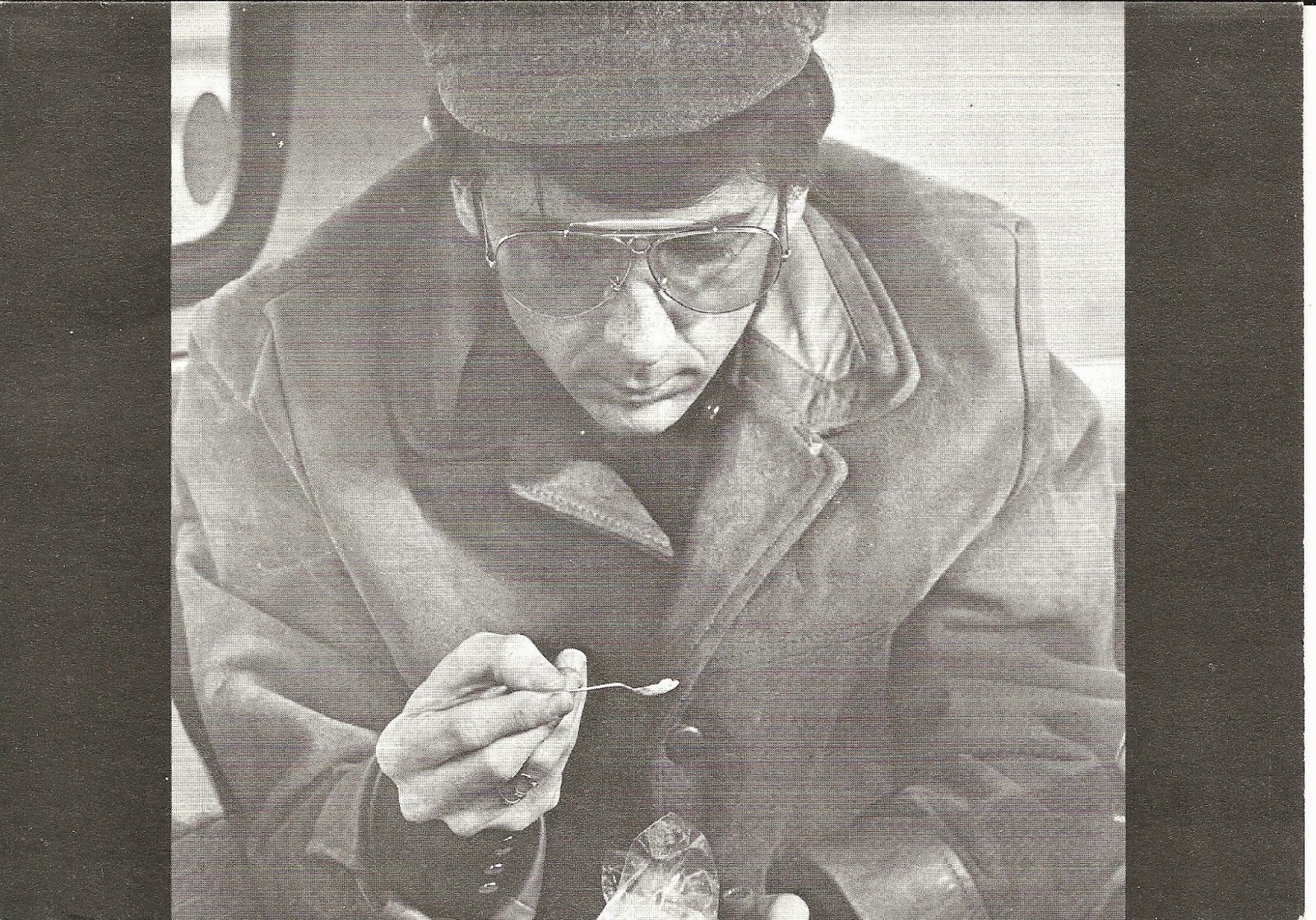 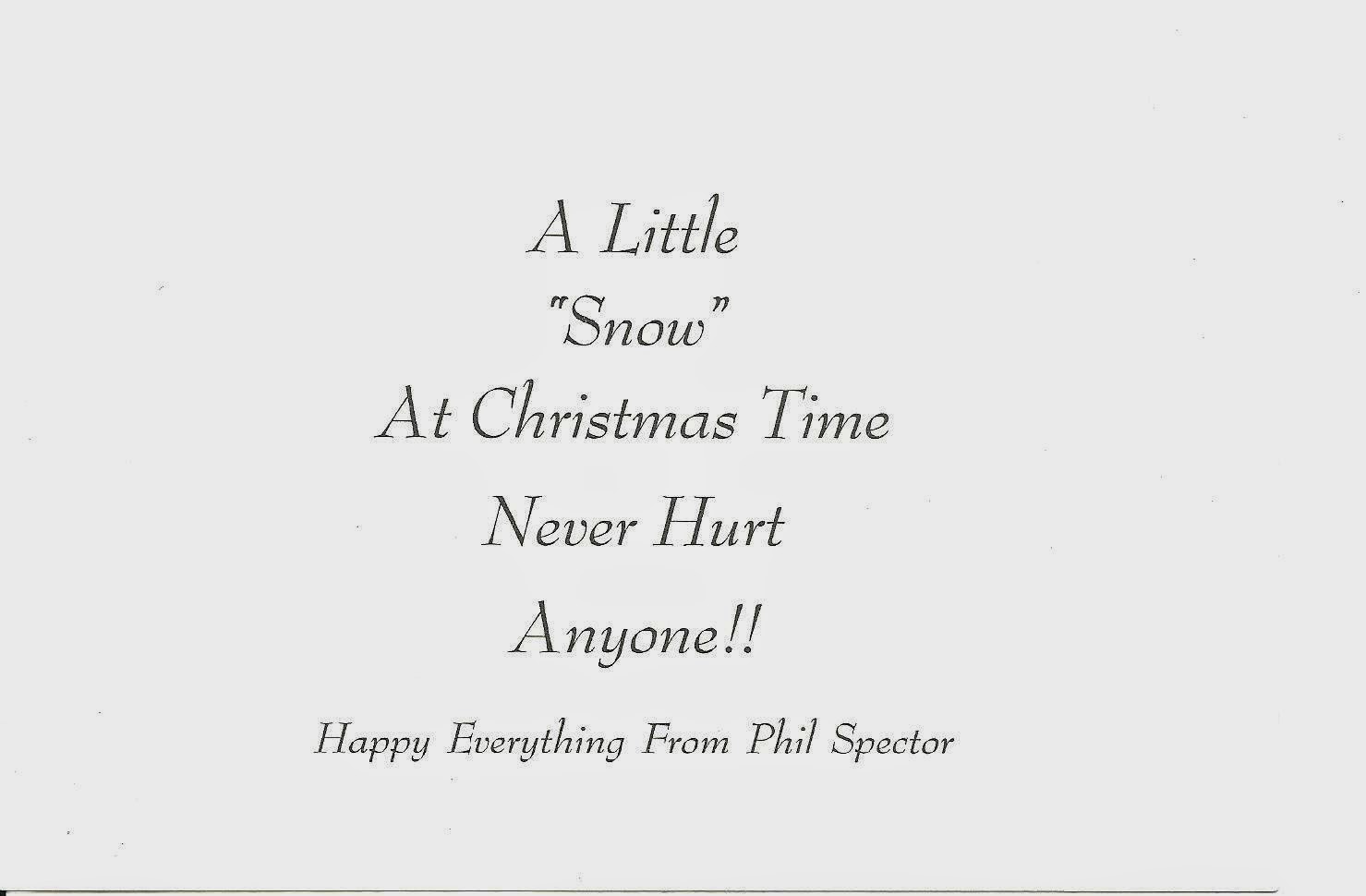 Kurt Reichenbach
Posted by Bill Reed at 8:19 AM No comments:

Here is some of the rough draft research material I sent to the liner notes writer, Keizo Takada, for the 2010 Japanese reissue of June Christy's "This Time of Year." Fans of the album, of which there seem to be an increasing number, might find this interesting. I also transcribed the English language lyrics for the booklet. I seem to recall that this Christmas suite was not actually commissioned by Christy, but that the Millers wrote with June in mind and presented to her.

Connie Miller (pen-name Connie Pearce) was born... 1920... really rough childhood in depression-stricken South Side Chicago... married her first serious boyfriend and fled Chicago for San Francisco... eventually abandoned by husband, worked odd jobs (two at a time to support her children), she discovered a musical side while working Wired Music (the forerunner of the modern Juke Box).

During WWII, she was working as a Wired Music operator in the afternoons, and a second-shift welder in the shipyards of Mare Island (a true "Rosie the Riveter")... landed a gig in a vocal group in San Francisco, appeared with many of the big bands of the day... during a jam sessions met another singer, writer, and orchestral arranger, Arnold E. Miller, Jr., who was singing with the group "The Mad Hatters." They split off with singers from both groups (Virgil McNabb and Niki Arlow) and formed "The Double Daters". She married Arnold Miller in 1949, had one son... mid-1950s began writing again (with Arnold). Among her works were NO SAD SONGS FOR ME, the title track of Alan (formerly of "The Modernaires" and now singing with "The Mods") Copeland's only solo album. THIS TIME OF YEAR was recorded by June Christy in 1961, but went out of print a few years later. Connie died in L.A. at age 73. My guess is that Arnold is dead also.

According to Todd Everett's liner notes in the 2005 reissue of This Time of Year, the Millers made up half of the Double Daters, a San Francisco vocal group. During World War II, the group sang locally with touring big bands that couldn't afford to travel with a vocal group. After the war, the couple moved to Los Angeles, where Arnold worked in advertising and Connie stayed at home. I do not know whether the Millers were part of the Double Daters that recorded If I Ever Love Again with Frank Sinatra in July 1949. Discographies don't list the group's members, and several vocal groups used the name, including one formed by vocal arranger Ray Charles, who worked with Sinatra at the time.

In Los Angeles, the Millers continued to write and publish songs. In the late 1950s, the couple was introduced to June Christy and her husband, tenor saxophonist Bob Cooper. In Christy recorded one of the Millers' tunes, Night Time Was My Mother, on her LP The Song Is June. Michael, the couple's son, is quoted in the liner notes: "Writing This Time of Year was their passion. They wanted to capture all the emotions of Christmas, from the joy to the sorrow. There are some emotional moments but also a lot of upbeat jazz." 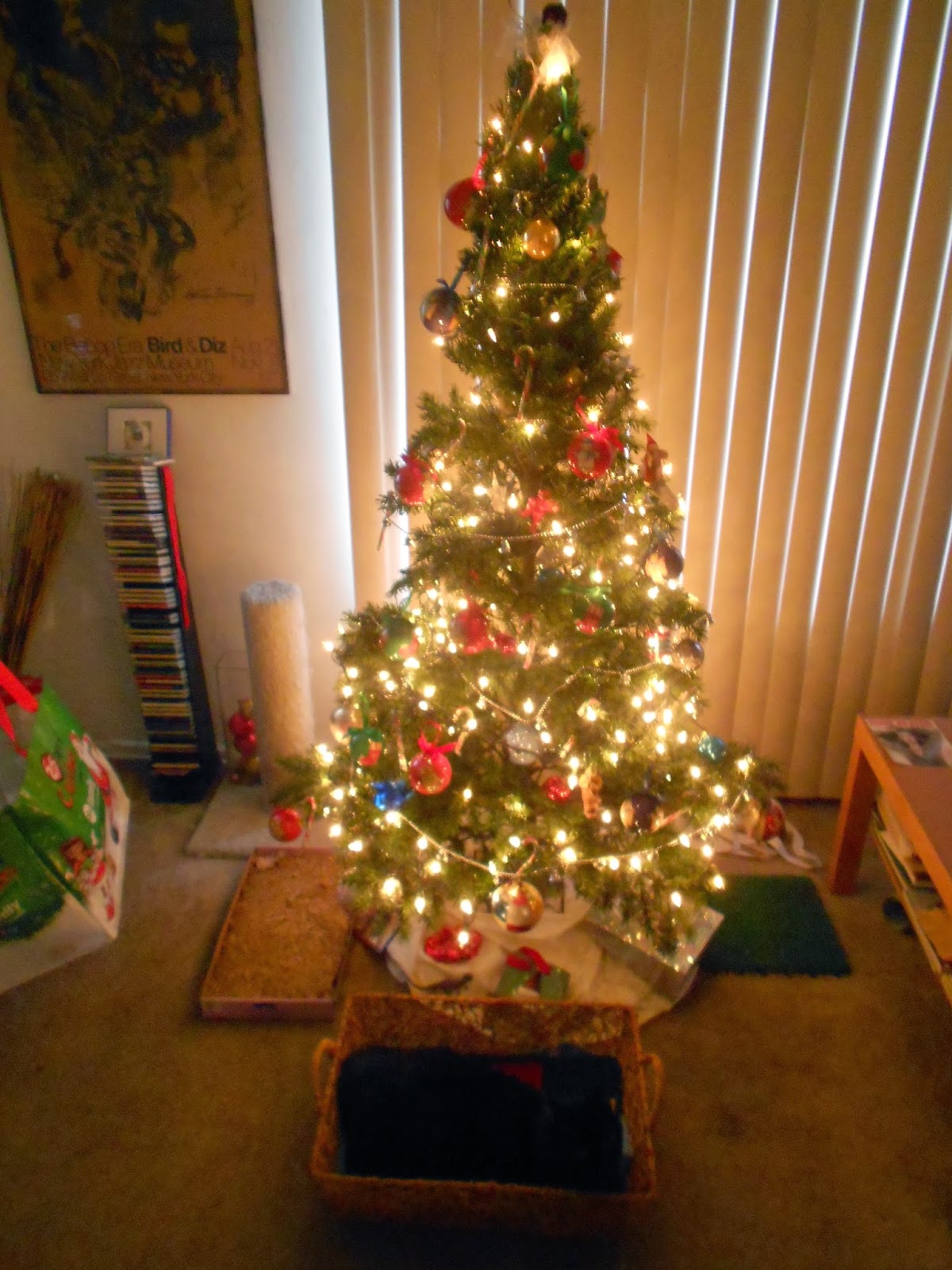 There's a cat (Kuro) in the box at the bottom of the tree. (Difficult to see because I didn't want to freak him with a flash.) Note: The other night Letterman said the reason that the Pope didn't, recently, specifically mention felines going to heaven is because "god is not a cat person."
Posted by Bill Reed at 9:19 AM No comments:

Christmas with Winters (Pinky, that is)

Doris Drew all dressed up for a country Christmas 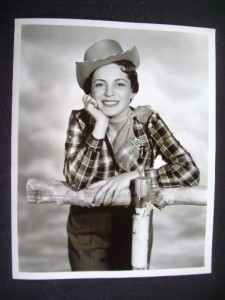 Listen
Posted by Bill Reed at 8:00 AM No comments:

This SHOULD be a seasonal standard.  Just listen to Rebecca Kilgore sing it some day and I think you'll agree. For that matter,  listen to Bessie Smith right now! (IMHO Dana Owens is NO Bessie.)
Posted by Bill Reed at 5:52 AM No comments: 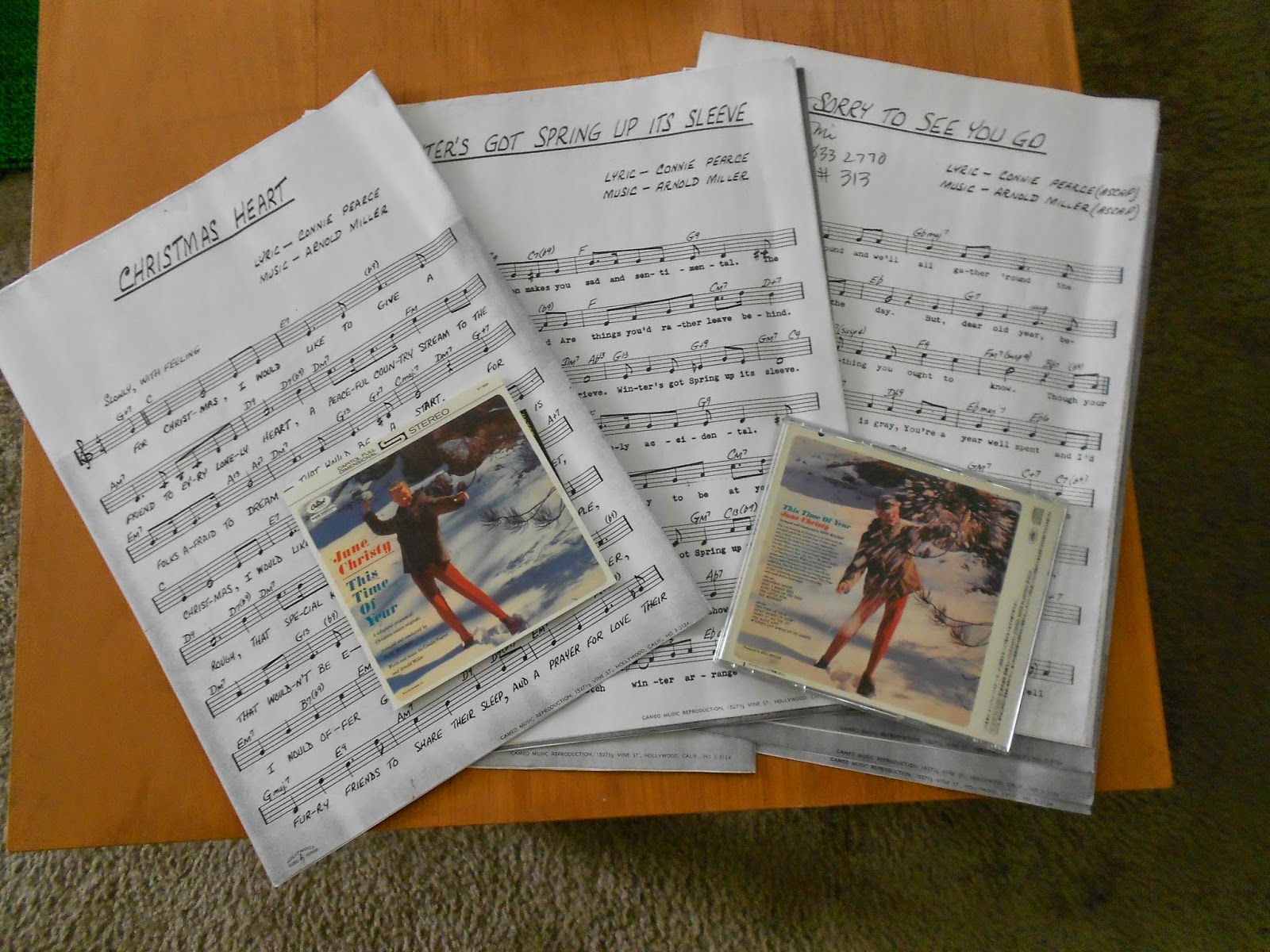 Day Seven: wouldn't be Christmas w/o it

Day Five - Can the Singing Dogs be far behind? .  . .my true love gave to me this track by Jack Sheldon. More Kubis/Sheldon/Xmas here.
Posted by Bill Reed at 12:00 AM No comments: 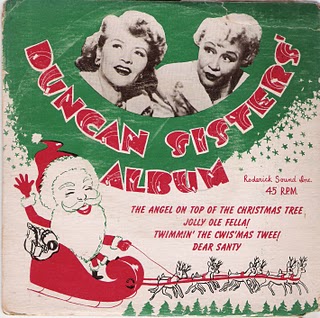 Track from the rare Duncan Sisters EP
Posted by Bill Reed at 9:00 AM No comments: